In the future, no duck will have to die because of missing legs. In fact, they will live forever if us nerds have anything to say about it. To wit: a designer named Terence Loring in Sicamous, British Columbia is busy building a fancy leg for a duckling named Dudley who, and this is true, lost his leg in an aggressive chicken fight. Loring owns a 3D design company called 3D Pillar.

Why Dudley decided to get mixed up in chicken warfare is anybody’s guess – there is some suspicion that the chickens were the instigators – but Loring will help Dudley live a long and fruitful life.

“When I am not busy working on building my new start-up company that focuses on architecture and 3D printing, I have been training in Brazilian jiu Jitsu,” said Loring. “My jiu jitsu coach, Brandon Schweitser, has family that own an animal rescue shelter that cares for injured and unwanted wildlife.”

“They had a litter of ducklings that were placed in the same pen as these chickens. Apparently that was not a good idea as one chicken was a real jerk and attacked the ducklings, killing his brother and severely injuring Dudley’s leg to the point it had to be amputated. My coach knew that my start-up company was going to specializing in 3D printing so he asked me to try to build a leg for his little injured duck.” 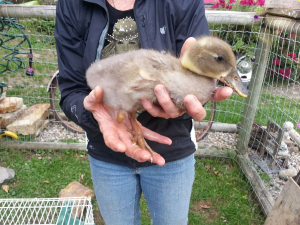 Loring began by measuring the duck’s missing leg and creating a simple design with a tube that goes around the stump connected to a flipper. A local 3D-printing company, Proto3000, is building the leg and Dudley’s minders at K9-1-1 Animal and Rescue will help him get used to walking with the new leg. You can watch Dudley in action at Canada’s Global News. I dare you not to “quack” a smile. Get it? 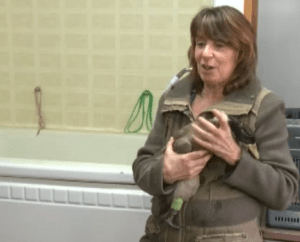 This is not the first time a duck has been saved through 3D-printing. In fact, a duckling named Buttercup received a 3D-printed leg last year after losing a leg to some “fowl” play.

“I would absolutely love if other people could use this design to help out other wildlife in similar circumstances,” he said. “I even put the challenge out there to design a better leg based on the original dimensions of the leg. It would be my dream to see this open-source platform take off where everyone is freely sharing their designs and ideas.”

Could this pave the way for an uber-race of cyberducks, who, while winging their way across the vast expanses of their airy realm, use their laser eyes and sharp, pointy robobeaks to help them find delicious white bread and/or enemy cats? I certainly hope so. Until then, waddle on Dudley, waddle on.