Pinterest may have passed Twitter in popularity in the U.S. according to new figures out last month from Pew, but globally the social network to watch may be Facebook-owned Instagram. According to research published today by the GlobalWebIndex, Instagram is growing the fastest of all social media sites worldwide, increasing its active user base by 23% in the last six months. But on an overall basis, it’s still behind the likes of Facebook, YouTube, Google+, Twitter and LinkedIn — which come respectively in at positions 1-5 of the world’s most popular social platforms in terms of penetration. 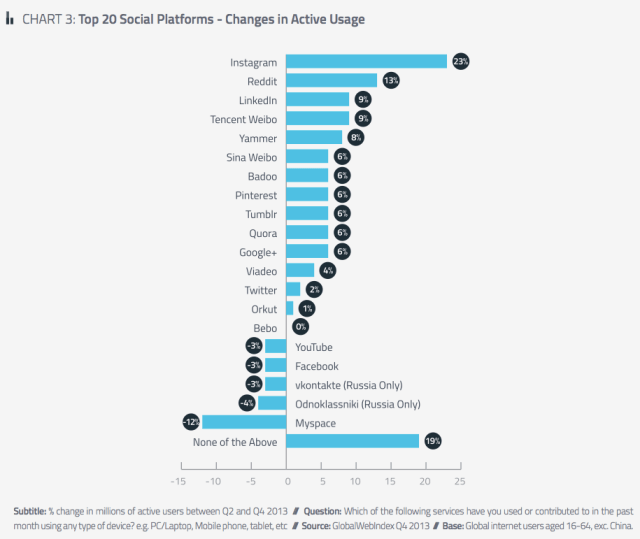 The survey, based on responses from some 170,000 users across 32 countries, notes that Facebook is currently the world’s most popular social network. Excluding China (where free access to sites like Facebook and Google is problematic), over 80% of the rest of the respondents said they had registered Facebook accounts; and around 50% said they were active users — also the highest proportion of any social platform.

As you can see in the table above, after a handful of global sites at the top of the pile, what the research also highlights is that a lot of social media usage exists on a longtail, with individual sites scoring high in particular countries or regions. (In one case this has helped the profile of one company in particular: Google suddenly appears like a real social media player, with YouTube, Google+ and Orkut all in the top 10.)

Given that many are ad-funded and are therefore scale plays, this leads to questions of whether we may see some consolidation among the smaller sites. In any case, localised popularity demonstrates that if Facebook (for example) did decide to start ingesting some of these smaller companies, the route ahead might be to let them operate as standalone entities while Facebook still benefits from the overall traffic.

And despite the influx of always-connected services and friends on them, there are still a notable number of holdouts. Some 10% of respondents are not using any of these services.

I’ve embedded an excerpt from the full report below (I’ve been asked to remove the full report). Here are some other noteworthy stats worth pulling out:

Mobile is king. When it comes to social networking services, mobile handsets are now the most popular form of access, with 66% of users saying they use mobile devices to access them. That edges out PCs and tablets, which scored level at 64%. GWI’s data indicates that the last time mobile handsets outstripped other devices was in Q1 of 2013, and that in fact the different platforms are playing a kind of shell game for leadership.

The same is not the case for microblogging services (which include messaging apps and Twitter usage). There, tablets are a clear leader with a 44% penetration. Combining that with mobile handsets’ 29% and PCs are really out of the picture. 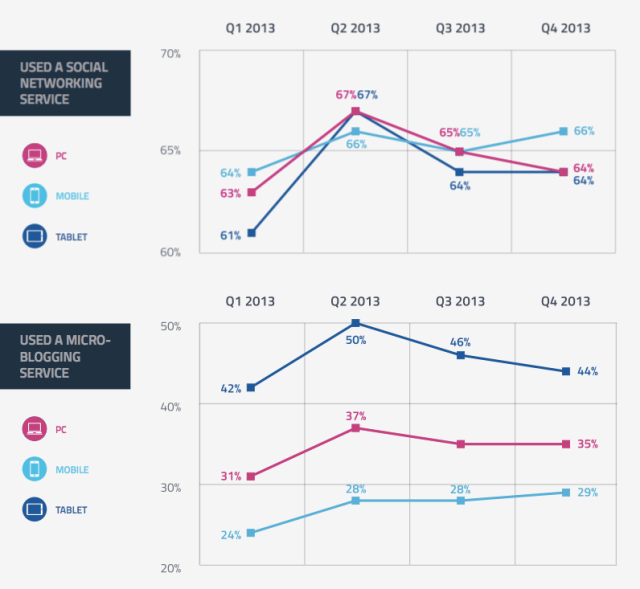 Regional breakdown. The tech world often operates with the view that North America, and specifically the U.S., are the center of the consumer technology universe, but in the breakdown here, you can see that penetration in Asia Pacific is close behind. These figures, as with the overall rankings, do not include China, and I suspect that if they did they proportions would tip by quite some way. 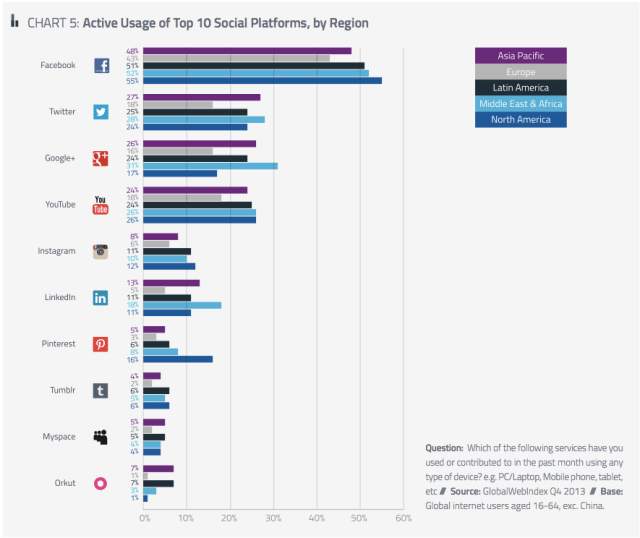 Looking at China specifically, the most popular site is Sina Weibo, with an 80% penetration for registered accounts and 58% for active users. GWI notes that despite the firewall issues in the country restricting access to certain sites, China is also one of the most prevalent for the use of VPN tunnels, which gives users’ devices the appearance of being based in a different country, and lets them access sites that would normally be inaccessible for a consumer in the country. VPN penetration is over 50%. 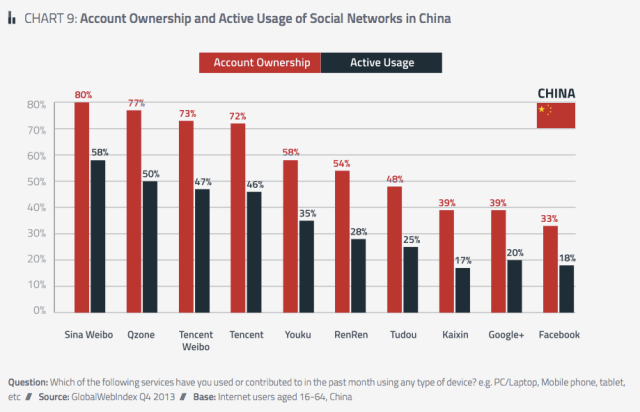