Like the last time people tried busing as a solution to a socioeconomic problem, the tech busing in San Francisco has become a hot-button topic.

The Google buses, described as “spaceships” containing “alien overlords” by writer Rebecca Solnit, have become potent symbols for income inequality within the city. Beyond the transportation issues, they are now symbolic of other unwanted repercussions of the tech boom, including rising housing costs, Ellis Act evictions and a “let them eat cake” mentality very publicly exhibited by many tech-employed, Bay Area newcomers.

Reading articles about Google using a yacht to ferry its employees across the Bay, or hiring security guards for its commuter buses, evokes a not-so-distant dystopic future.

Thus, the city of San Francisco, which currently lets the commuter buses use MUNI stops free of charge, is scrambling desperately for a compromise. Tomorrow the seven SFMTA board directors will vote on a proposal for shared use of the bus stops. And in preparation for tomorrow’s board meeting, the Transportation Team at Google sent the following memo to its SF employees:

This Tuesday (1/21), the San Francisco Municipal Transportation Agency (SFMTA) Board will meet to vote on the proposed shuttle regulations we told you about last week. The hearing will take place on January 21 at 1pm PT at San Francisco City Hall (room 400). While we recognized that many of you won’t be able to make it during the workday, we encourage any interested Googlers who live in San Francisco to speak in favor of the proposal (please RSVP here if you are planning to attend). While you are not required to state where you work, you may confirm that Google is your employer if you are so inclined.

If you do choose to speak in favor of the proposal we thought you might appreciate some guidance on what to say. Feel free to add your own style and opinion.

You can read the full press release announcing the proposal here, and we’ll keep you updated in the coming weeks as the proposal moves towards approval. Feel free to email us at transport@google.com with any questions.

Thanks, XXXX, on behalf of the Transportation Team

The missive was then forwarded to Heart of the City, the activist organization who organized the faux Google bus performance at SF Pride and the first Google bus blockade on Dec. 9 (though not the subsequent one in Oakland that turned violent). They sent it to us, and we verified it through a second source. Google has still not returned our request for confirmation.

In the email, Googlers are given boilerplate talking points to take to the board meeting, including “If the shuttle program didn’t exist, I would continue to live in San Francisco and drive to work on the peninsula.”

It’s notable that a Google employee actually points out the heavy-handedness of the memo on the thread, mentioning that this would look bad for Google if leaked to the San Francisco Chronicle or Valleywag.

“Am I being too paranoid?” the employee asked. No.

This message comes off a bit high handed and I don’t think it would be good if it showed up on the front page of the chron or valleywag.

Or am I being too paranoid? XXXX
[Quoted text hidden]

“They’re urging their employees to say they would drive if not for the shuttle program to keep the ‘eco-friendly’ excuse alive and continue using SF’s tax-payer funded bus stops for virtually nothing,” a representative from Heart of the City wrote in response to the memo. “[According to an SFMTA survey] 31% said they wouldn’t be able to make the trip at all, which implies over 5200 people would choose to live closer to their work in Silicon Valley.”

The survey did not include the option “Quit Google and join an SF-based startup.” 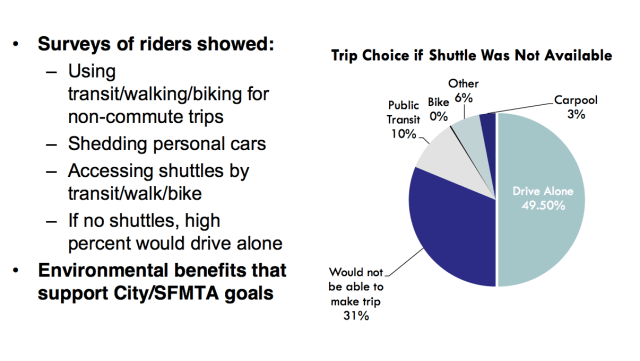 Slide from the SFMTA shuttles proposal.

If voted through tomorrow, the 18-month Shuttle Partners Program pilot would mean the creation of around 200 legal commuter shuttle stops, according to the SFMTA, and charge the commuter buses $1 per stop, a fee that would not result in any profit for the SFMTA (though the $1.5 million raised would cover the cost of the program).

Raising the fee to the total fines accrued for using the stops illegally or implementing a tax to bring in meaningful revenue for SFMTA, as activists propose, may require voter approval, according to SFMTA Director Ed Reiskin. Heart Of the City estimates that if the SFMTA decided to implement the $271 fine for each time the commuter shuttles used the stops illegally, it would add up to approximately $1 billion dollars.

Busing is just one element of a perfect storm brewing in San Francisco — tech workers vs. the rest of the city — where proponents of the free market come head to head with people unhappy with the loopholes in that market, i.e. the millions in tax breaks offered to tech companies like Twitter or the Ellis Act. The activist argument is that if tech companies don’t have to pay taxes (or fines), they should somehow be responsible for protecting the community in other ways.

While it is a perfect storm, there is no perfect solution for the problems caused by the tech boom and no straightforward explanation as to how the busing affects the real estate crisis, though every resident has an opinion on it — usually emotionally charged. Here is a particularly nuanced one on Quora.

Should corporations feel a fiscal responsibility to a community if they’re leaning on public infrastructure — like public bus stops — to accumulate their cash piles? My views are my own here (not TechCrunch’s), and I think so, though the issue is too complex to fully dissect in this post about a leaked email.

Perhaps Google should build a Google.org focusing only on Bay Area municipal issues? What I do know is that Google, instead of canned talking points, should be sending their employees links to both sides of the debate and increasing awareness instead of acting vaguely like Big Brother.