Sure it’s not made of metal, nor did it convince Google to give its creators billions of dollars, but dammit if this isn’t a cool hack. The folks at Spark.io, creators of the Spark Core, a unique Wi-Fi development board that allows you to add Wi-Fi controls to Arduino projects, have used their tech to create a Nest-alike with some of the same features as Tony Fadell’s popular wall wart.

The team essentially created a web-connected thermostat by cutting out a nice hunk of wood and some plastic and adding a Spark Core and some control logic. The device can change temperature by scrolling the large wheel on the front and displays the temperature using an LED display. Most of the other logic – including temperature logging and remote control – happens on a remote server. To sense the temperature and humidity they added a Honeywell HumidIcon chip and a motion sensor tells the system when you’re away. They tested the whole project out on a breadboard first and then stuck the whole thing into the small casing they made.

Is this high quality stuff? By no means, but it’s cool that they tried. As the team wrote:

Fair warning – we’re not claiming to have matched the Nest thermostat in a day; far from it. But remember — every polished product starts as a rough prototype. As Alexis Ohanian said last week, “The first version of everything you love is janky!” 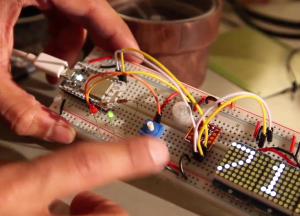 I love projects like these. They prove that almost anything can be reverse-engineered – even improved upon – and it shows just how easy it’s become to be a hardware hacker even without years of experience. Doing this, in short, would have taken a team months to develop and build and now it takes a couple of cool kids a few hours. Yowza indeed.