Grokr, a company that had previously been working on a sort of “Google Now”-like application for iOS users, is launching its latest creation called Fantastic into public beta today. The new app, a smart music player for iOS devices, lets you not only play your own music, but discover new artists and tracks you may be interested in, as well as new videos, upcoming concerts and more.

What Happened To Grokr, The “Google Now for iOS?”

Fantastic takes advantage of the same technology Grokr had built for its flagship application released in late 2012, before quietly shutting down sometime last summer. At the time, we had heard reports that the company being acquired by Apple, but, as it turns out, that was not the case. We understand now, according to sources, that while Grokr had indeed engaged in discussions with Apple and other large internet companies, the team decided to instead shift away from its original product to focus on a series of single-purpose apps instead.

Asked why, co-founder and CEO at Grokr Labs Srivats Sampath says they realized that people were having trouble understanding the use case for Grokr because it was so broad.

“They had no idea what the app did or for what reason they needed to go into the app. It was very eye-opening for us,” he explains. “And when we spoke with the Google Now guys, they gave us similar feedback: it’s one thing to build a platform, but it’s another to try to sell that platform as an app,” Sampath adds. 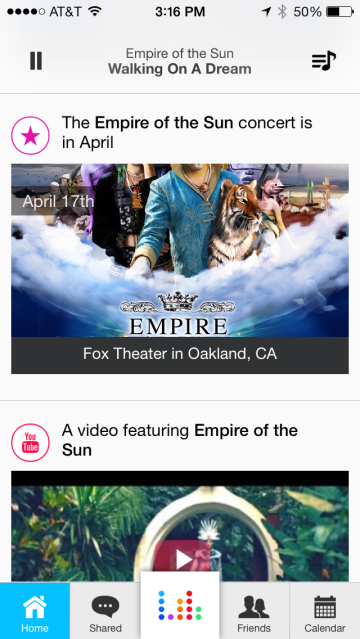 So the Sunnyvale-based team went back to the drawing board, instead of opting for the exit. Sampath, who was previously founder and CEO of McAfee.com, Discussion Corporations, and Mercora in years past, says that he has learned not to give up too soon. “This is my fifth company. Out of five companies, two went public and two went under,” he says. “Plus, ninety percent of success is just surviving.” Putting his money where his mouth is, so to speak, Sampath personally invested another half a million into Grokr last June.

Grokr had been going in the right direction in terms of the larger trend of predictive search, but now the company is going to take advantage of the underlying technology to build a series of new applications. After Fantastic, they’ll release other “smart” apps, like, perhaps, a smart news reader, video player and smart browser.

Fantastic, however, is the first out of the gate, as it was already something lead developer (and music lover) John Brunsfeld had already created as a side project. He had built an app that used the Grokr platform to allow him to find out about new music and concerts. Today, the more polished Fantastic app, now in public beta, does the same.

After installation, you tell Fantastic whether to reference your iTunes library or your Spotify Premium account. Then, using this data, as well as social data, location data and more, Fantastic will offer a real-time music feed detailing new and upcoming releases, nearby concerts, YouTube videos, trending Facebook posts, tweets, and articles about your music, as well as what your friends on the service are saying about a track or an artist. 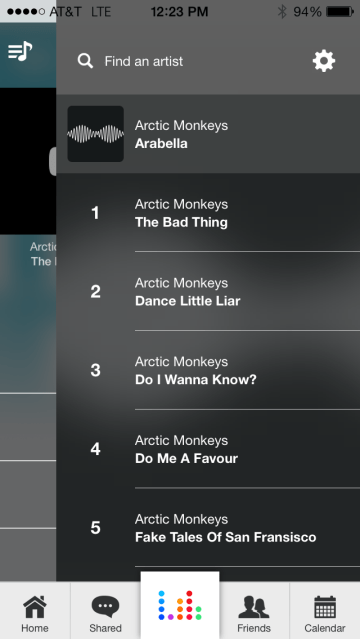 “Essentially, what the platform does is it learns everything about you,” explains Sampath, “and then it takes that and applies that to a knowledge graph – in this case, we have a massive knowledge graph of music-related, event-related, and artist-related information.”

The end result is an app that, in theory, will tell you want you need to know about the music you like and related events.

For obvious reasons, the app works better if your Spotify account reflects your own tastes, and not those of, say, your partner or kids who may also be using your same account. But over time, the service can learn more about you as you play tracks, which should improve the relevance of its suggestions.

Fantastic has been in private beta since September, and now earns around $0.65 in album sales per user per month – basically, half a single. But the company’s goal is to increase that to $1.50. It could also push users toward ticket sales to generate additional revenue.

Going forward, Grokr’s team is also shooting for one new app per quarter, including things like the iPad release and Android release of Fantastic, which will arrive before any other smart applications. (Unless, of course, one starts really blowing up during a private beta test).