While Samsung and Android continue to increase their market share on a global scale, the U.S. continues to be a story directed by Apple and its iPhone. Q4 2013 figures out today from the Connected Home Report from The NPD Group indicate that the iPhone now has reached ownership of 42% of all smartphone owners in the U.S., while Samsung is now at 26%.

As a point of comparison, in the same quarter a year ago, Apple had a 35% ownership share, and Samsung had 22%: in other words, the gap has slightly widened in a key market for both companies.

The news is not a good sign for Samsung, particularly when early indications from Kantar Worldpanel Comtech are that in China in December, Samsung lost its position as the number-one vendor to local favorite Xiaomi in terms of sales. The analyst firm’s full report on this will be out at the end of this month.

The wider picture in the U.S. is that smartphone penetration in the U.S. continues to rise, NPD further notes. Now some 60% of mobile phone users are using smartphones, compared to 52% a year ago. This indicates that, despite some theories that maturing markets will see a rise in low-cost sales over premium devices with a shift from early to medium/late adopters, this doesn’t appear to have happened as much in the U.S. — or carriers, resellers and Apple have found a market for less-expensive and older iPhone models, along with its newer, more expensive editions.

Among other leading handset makers, the only other OEM to see growth in market share was LG, while Motorola, HTC and BlackBerry all declined. Nokia and its Windows Phone operating system do not have a large enough share on its own to merit a separate rank, so it has been lumped into “others” — a group that also declined in another sign of increasing consolidation around the very biggest platforms and brands. 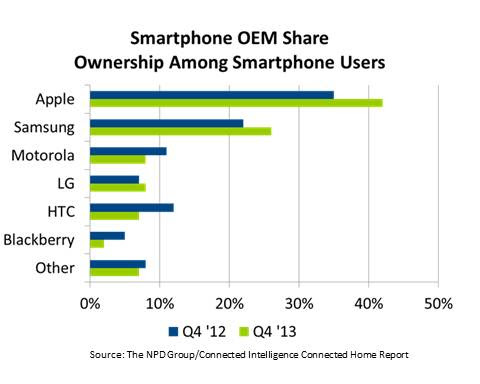 The growth in smartphone ownership has had a direct impact on data usage rising, too. It’s now at 6.6 GB per month in the U.S. compared to 5.5 GB a year ago. NPD says that one of the “key drivers” of that has been streaming music services. Some 52% of smartphone owners now use apps like leader Pandora and number-two iHeart Radio. Interestingly, although Spotify gets a huge amount of press, it’s third in line behind these in terms of usage.

App usage figures in the report, NPD says, come from its on-device “SmartMeter” covering 4,500 smartphone users, while some 5,000 U.S. consumers over the age of 18 were surveyed for the Connected Home study.