Google just released a new app in the iOS App Store, and it’s a significant one when it comes to the company’s content strategy — the awkwardly named Google Play Movies & TV is an iTunes Store competitor for movies and TV shows. You can watch your Google media content directly from your iPhone or iPad. But, just like the Kindle app, you won’t be able to buy or rent your content directly from the app — you’ll have to use the browser.

With today’s release, Google is using a strategy that was very efficient in Amazon’s case with the Kindle — if you want to make people switch to your content ecosystem, release your app on every major platform.

The company has an advantage over Apple. If you own an Android phone and an iPad, you can watch your Google Play movies on both devices thanks to the new app.

The app is pretty straightforward. You can browse your content and watch a movie or a TV show directly on your iPhone or iPad. There is a Chromecast button as well to stream your video to your TV.

Yet, Google is a bit behind in the content game. It doesn’t have the same thorough deals in place. For example, you can only buy or rent TV shows in the U.S., Japan and the U.K. So if Google Play Movies & TV is available in your country, it could be a nice alternative to the iTunes Store, Amazon Instant Video and other minor players.

Apple still has two key advantages over Google on iOS. The iTunes app is already installed on your iOS device when you first launch it, and Apple rejects apps with an integrated content store. That’s why you can’t buy books from the Kindle app on iOS — it’s one of the iOS SDK rules.

In other words, users will have to browse the Play store from Safari or another device. It’s not the best experience possible, but it works — Apple keeps the best user experience for its own store. 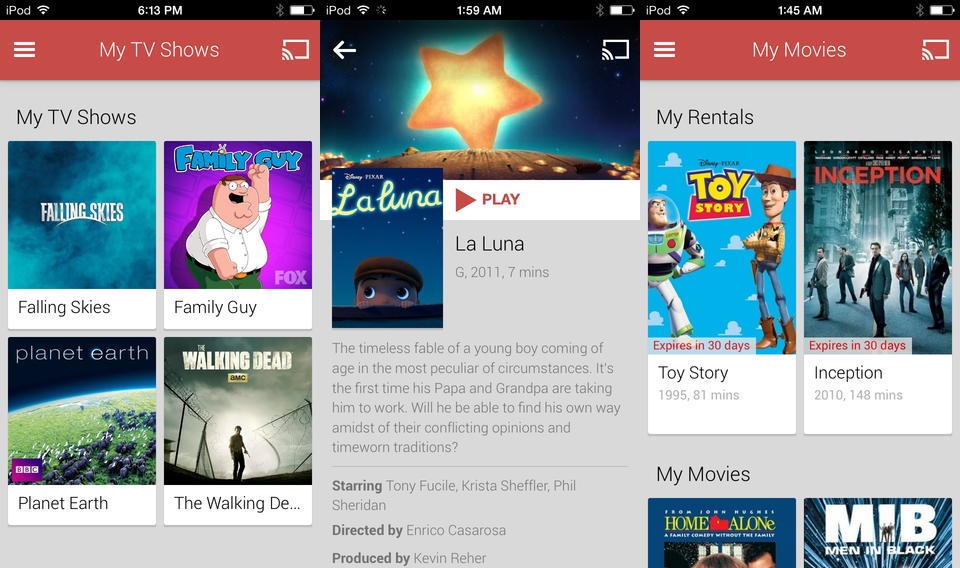