As mobile networks and digital communication tools improve, there’s a huge opportunity to re-imagine the calcified old world of healthcare. Some services are looking to do that by bringing the house call back to the healthcare market, by way of mobile devices and video chat, for example.

While the opportunities in mobile health are exploding thanks to new gadgets and sensors, First Opinion wants to address the nagging deficiencies of the system — like long lines at doctor’s offices and impersonal care — with a familiar, SMS-based model. Rather than offer video conferencing or a database of health information, the startup (and app of the same name) boil it down to what founder McKay Thomas thinks is most important: The ability to text message a doctor any time, night or day — especially for moms.

Thomas tells us that he believes one of the biggest problems of the current healthcare system is that people don’t feel true connections with their doctors and hate the impersonal nature of meeting with a doctor once every year. Thomas, who is also the co-founder of Baby.com.br, the “Diapers.com” of Brazil, has run a mom-focused business before and came up with the idea while living abroad with his newly-pregnant wife.

Unable to find a good way to get in touch with a doctor to ask health questions and about the many subjects related to raising children for the first time, he decided to leave Brazil and head back to the U.S. Recruiting his CTO and co-founder, Jay Marcyes from Path, the two built First Opinion and launched the app in early December.

It quickly took off, hitting the fourth spot in the App Store’s health category within two days and saw 10,000 doctor “consultations” in its first month, with the average chat length today now over 10 messages. To help take advantage of the early interest, the co-founders raised $1.2 million from Greylock, Yuri Milner, Felicis Ventures, 500 Startups and more to help recruit more doctors and grow its team.

Today, the app works like this: Once a user downloads First Opinion, they are matched to one of the startup’s handful of vetted stable of doctors, connecting the user to the “right” doctor based on gender, what they’d like help with, how many kids they have and whether or not they’re expecting. 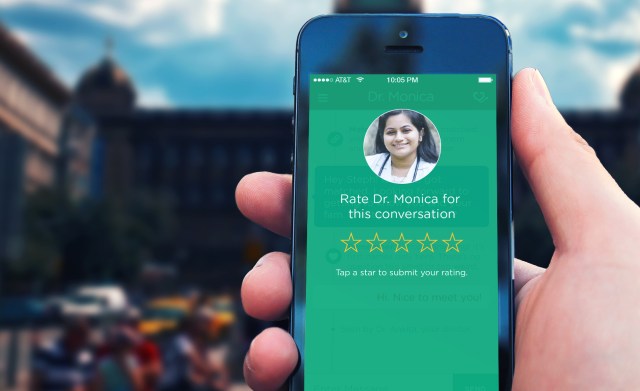 Once matched with a doctor, which Thomas says usually takes less than an hour, the user can begin their first chat with a doctor for free, asking any questions of their doctors they would like. To avoid having to secure HIPAA approval, the user remains anonymous, though they can view some basic information about the doctor they’re chatting with and share as much of their own info as they’d like as they chat.

After the first chat, the user will hit a paywall, where they’ll be asked to pay First Opinion’s subscription fee of $9/month. By paying the subscription fee, they’ll be able to have unlimited access to their First Opinion doc. From there on out, every conversation is with the same doctor — and every question is answered by the same doctor — so that the user feels like they have their very own SMS M.D.

What Thomas believes can lead First Opinion to succeed where others have stumbled is that the app is designed to feel more than a health-based Quora or Q&A platform and more like a personal conversation between you and your physician. This is important, but the app will need to do more to ensure users of their doctor’s backgrounds and identities, and seeing as there isn’t exactly an enormous barrier to entry here, the product will likely have to evolve quickly to prevent easy replication.

For now, it’s a great workaround and a quick, simple fix to the impersonal nature of our healthcare system. Like its name, it’s an easy way to get a first opinion or response from a doctor on those nagging health issues, especially for moms and for children’s health questions and link up with a doctor permanently — if you like them. It’s realtime or asynchronous chat with your friendly, family physician, who’s also a parent and who couldn’t use more of that?