Twitter is rolling out a new design on the web today that eliminates the pop-up compose window and brings its look more in line with its mobile apps. We’ve been seeing Twitter test versions of this design for some time now, but this particular one appears to be the test bucket that got the best reaction from users.

It looks, in some ways, a lot like the old version of Twitter — with a profile box and other information presented to the left of the main timeline. One of the biggest changes, of course, is that there is now an inline compose box on the left side, allowing you to pound out tweets without having to deal with the pop-up compose box. The pop up is still accessible via the ‘new tweet’ button in the upper right corner and the keyboard shortcut. 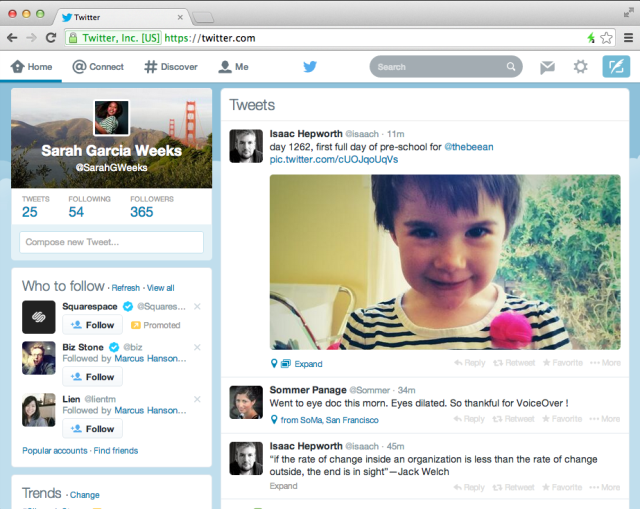 Placing a compose box right in the left column should make the interface feel a bit lighter weight, inviting people to tweet out a bit more than placing it ‘under’ the compose button. I’d guess that this was aimed at converting lurkers to tweeters.

If some of you are looking at this design and thinking ‘hmm, this is how mine has looked for weeks’, then congratulations, you’re in one of Twitter’s test buckets. The company experiments heavily, giving 1% of its users a tweaked or refreshed design and testing how they interact with it before rolling out changes on a wider scale. We’ve been getting reports of this particular design — or one with some of its elements — for a few weeks now.

The alignment of Twitter’s web edition with its mobile versions for iOS and Android certainly makes sense. A large recent release saw major changes in both design and functionality. The web version has lagged a bit behind those releases in the interim, but now feels much more at home.