Amazon scored one of the greatest tech PR coups in recent history when it got CBS to put its quadcopter-powered delivery service on air the day before Cyber Monday. Sadly, CBS pretty much ignored that this was a pretty unrealistic proposal for the time being, not in the least because commercial drone flights will remain illegal in the U.S. for the next few years.

If journalists aren’t even allowed to use a standard quadcopter to take images of people on a beach, having autonomous unmanned aerial vehicles (UAVs) deliver the latest Stephen King tome to your door is obviously still a while out, too.

With the hype around Amazon’s drone dying down, let’s take a look at what’s holding commercial drones back and what we can expect once they take flight.

The technology for drones is here, no doubt, but government regulation isn’t and there are good reasons why the FAA is taking things slow.

By 2015, the FAA is supposed to create rules for integrating unmanned planes, quadcopters and other flying contraptions into the regular airspace. That’s quite a challenge. For a human to start flying around in a small Cessna, it takes an average of 60 hours of instructions and a written and practical exam before they are allowed to start puttering around in U.S. airspace. And that’s just for the most basic of pilots’ licenses. 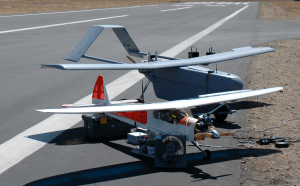 Even today, pilots mostly use old-fashioned radio to talk to each other and air traffic control (ATC). Controllers can watch them through radar or, if the plane is equipped for this, by using GPS and digital transmissions to get even more accurate readings. Pilots generally don’t see all of this information, though – it’s ATC that relays the info that’s relevant to them. Even in this system, some older general aviation aircraft are permitted to fly without radio.

How are pilots supposed to talk to ATC? How could ATC talk to drones? How would the drones talk to ATC? Who gets to pilot these drones and what license do they need? What about autonomous ones?

Now imagine all of these drones flying around in this airspace, too. That sounds like a recipe for disaster. Regular pilots scan the sky for other planes whenever possible, but how are they going to spot a small drone, especially during stressful times like take-offs and landings? What happens when a drone suddenly goes haywire and starts doing its own thing and heads for the arrival path to JFK?

The FAA still needs to figure all this out, though none of these issues are insurmountable. They just take some better tech and a regulatory framework. The FAA could create special routes for drones, set height limits and ban them from the area around some airports to keep them away from regular air traffic, for example. Drone manufacturers can already add smart seek and avoid technology to their UAVs to keep them away from other planes.

Getting commercial drones flying is still years away, though. The FAA only just selected six test sites where different groups will experiment with ways to integrate drones with regular air traffic. These sites are currently set to operate until 2017, and given the FAA’s penchant for running late, I wouldn’t be surprised if this whole process took a few more years. The military clearly has procedures set up for how it uses drones, but we are talking about highly trained specialists here and even they have a rather spotty safety record.

So what should we expect once we get commercial drones flying? I imagine the first kind of licensed drone operations will be pretty straightforward and will have nothing to do with delivering books or tacos.

What we’ll see is quadcopters or very small planes that can be used to survey farm land or build sites autonomously (which is already possible today). Later, we may see drones from UPS, FedEx, Ameriflight and other delivery and cargo services. They will likely use them to cheaply ferry shipments from their hubs to smaller airports (on routers where they currently use small turboprop planes).

Today, photographers are happily using remote-controlled planes and quadcopters. None of them can do it legally in the U.S. and the FAA isn’t shying away from sending cease and desist letters. I doubt a photographer with a drone who is taking real estate pictures is much of a threat to regular aviation, especially given that anybody who doesn’t charge for these photos can happily do so. Still, this market will immediately boom once the FAA allows for this kind of usage.

But what about those tacos? Once the government gets its act together and creates rules for commercial drones, all of these Amazon-style delivery services may be able to finally take off, too. There is no need to recount all the challenges they face. My feeling is that those are mostly technical problems that can be overcome (better sensors and maps to avoid trees, power lines, children and dogs, QR codes in people’s gardens as landing sites, improved battery life and who knows what else). Long before that, though, we’ll see the more basic use cases described above and maybe even a few we haven’t quite envisioned yet. And who knows, maybe by 2020, we’ll see a drone-based pizza delivery service.