Smartwatch pioneer Pebble is introducing something everyone has been waiting for at CES this year: new hardware. But the hardware isn’t so new that it throws the baby out with the bath water – any software developed for the current Pebble will work with the new one, and vice versa. And there’s something new for everyone, since Pebble is also announcing the launch window for its application store and new parter software.

We chatted with Pebble founder and CEO Eric Migicovsky, who was excited about the new smartwatch hardware, particularly because it represents a way for the company to move forward with design while keeping things simple for developers and not punishing early adopters (or even Kickstarter backers) who already have the first version of the Pebble.

“Those are the people that supported us from the get-go, those are the ones that deserve all the updates and new software,” he explained, talking about how firmware and apps will be compatible with both Pebble and Pebble Steel automatically. “Same price for Pebble, too, at $149. We think there’s a lot of demand in the smartwatch space, and these will satisfy different needs.”

The new Pebble Steel features a stainless steel body, with Corning Gorilla Glass covering the screen instead of plastic. The construction definitely feels premium, and it adds a bit of weight as a result, but it still feels surprisingly light. There’s a natural brushed stainless finish option, and also one featuring a black matte PVD treatment, which is a popular route for watchmakers to take because it’s highly scratch resistant and long lasting. The Pebble Steel also has an LED indicator for showing battery charge, and is both waterproof and features a battery that lasts up to a week, just like in the original.

Each new Pebble Steel retails for $249, or $100 more than the standard Pebble, which will continue to be sold. It’ll be distributed exclusively through Pebble’s own online storefront at first, and ships January 28, with pre-orders kicking off today. In the box is the watch and two bands, one leather and one steel link version with a push button clasp. These unfortunately feature proprietary connectors for attaching to the watch, so you can’t just use off-the-shelf standard watchbands. I’d expect to see Pebble release a variety of options later for those who want to change the bands out, which is a page borrowed out of Swatch’s playbook for making revenue on high-margin accessories.

Alongside the new hardware, Pebble is finally making their app store available to users, which debuts later in January, likely alongside the Pebble Steel though the company hasn’t put a firm date on it yet. Migicovsky says they’re pushing for a good launch library with devs, and to make it in time for launch, anyone with an app should submit it by January 9. 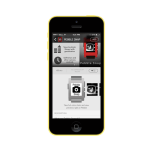 Finally, there are new partner apps for the Pebble, too, including a car stats monitoring app for Mercedes, a playback control app for Pandora, and sports stats and box scores through ESPN, Migicovsky revealed. And with each of these partners, Pebble is essentially blazing a path for all wearable software to come.

“The people that I mentioned, they were all super keen to do a watch app, but didn’t know exactly what that would look like,” he said. “So we actually worked alongside them to figure out the app. Pebble’s not designed to replace a smartphone, it’s designed to complement it. In the same way, the apps aren’t designed to replace a mobile app – you’re not going to type an email on your Pebble. But you can do a small bit of what happens on the smartphone on your wrist.”

Being an early mover in wearable tech means Pebble has new hardware before many even have their first entrant. But it also means they in many ways get to define what it means to build software for this new category of devices, and that could end up being much more valuable down the road than anything else.