Last year, Square debuted Stand, a piece of hardware that turns a merchant’s iPad into a card-swiping register. The idea was to provide a simple and elegant way to allow merchants to accept Square for credit card processing and swiping via their iPad. In news announced today at CES, Square is extending this ease of use to iPhone users of its card readers, via a new partnership with hardware developer Griffin Technology.

Until now, Square hasn’t debuted any accessories for its card case reader. Third-party developers have created key chains and cases for the readers, but these haven’t been part of the Square ecosystem. Square and Griffin are announcing a new Merchant case for iPhone 5s and iPhone 5, which is a protective case optimized for a Square Reader and a companion iPhone. The Merchant case, which also includes a Square Reader, is available to order for $19.99 here (current orders shipping within 2 weeks).

Square is also announcing a new initiative called Works with Square, which allows developers to build accessories for Square businesses. The inaugural partnership is the one being announced today with Griffin, and Square says it actually partnered with the hardware accessories developer to design the Merchant case to enhance both performance and convenience for merchants selling on the go with Square.

The case itself is custom-molded to secure the Square Reader when connected. A groove in the bottom of the case aligns with the Square Reader to guide a credit card to a frictionless, consistent swipe. The case is made from silicone, and aims to protect the phone from bumps and drops. Additionally, the merchant case features non-slip sides and corners so it’s easier to hold the phone and to hand over for customers’ signatures. And when merchants are not using the Square Reader, the hardware can be detached and stored in the back of the case. Aesthetics wise, the case is no beauty, but it seems to be solid and functional.

It’s unclear what percentage of Square’s merchants use the iPad vs. iPhone for readers, but it’s probably safe to assume that many merchants who are on the go (i.e a massage therapist, tutor, taxi driver) would use their iPhone over an iPad. The case provides a pretty easy way to use your iPhone for personal and professional use when accepting payments. Square decided to develop this case for iPhones, and has not yet developed any sort of external accessory or stand for the Android (although its reader does work with Android). 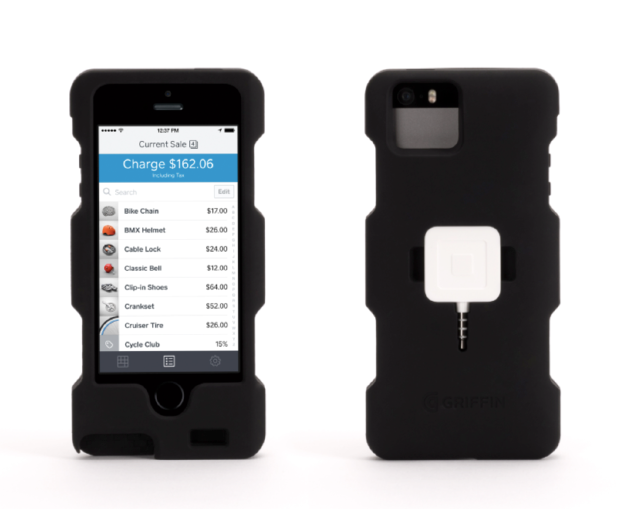 In terms of the Works With Square program, Square is expanding its ambitions beyond just providing point-of-sale hardware into providing accessories that are optimized for the Square experience. This could mean that the company starts partnering with the developers of receipt printers, kitchen printers, cash drawers and barcode scanners to create a more connected experience for merchants. We asked Square whether there is a revenue-share agreement with developers in this program, and did not receive an answer. But the company did say that products in the Works with Square program can use the Works with Square badge on their packaging, and in certain cases, can include Square readers as part of their packaging.

As Square prepares to potentially go public, it’s clear the company is creating an ecosystem of sellers and developers around its payments products and hardware. Square just debuted an API for the first time in December and also launched a marketplace for its merchants to be able to sell online as well as in-store. Works With Square could be another channel through which Square’s brand and readers are promoted.