Editor’s note: Daniel Doktori works in the emerging companies practice at WilmerHale in New York City and is the co-founder of the Harvard Law Entrepreneurship Project. Follow him on Twitter @ddoktori.

Airbnb challenged local hotel zoning laws, Uber took on taxi licensing requirements, and Pinterest built a business around posting copyrighted images. Startup companies that simply follow the rules risk getting left behind. The right lawyer can mean the difference between pushing the envelope and breaking the law. Many startups struggle to decide whether and when to hire a lawyer and how to make the most of their in-house attorney once they do.

I asked several prominent General Counsels of tech companies (and one VC fund) about their work and about how their companies approached the decision to hire them. Here’s what they said.

“Being general counsel is like being Tom Hagen in the Godfather – you’re a Consigliere,” the top lawyer at a New York City startup recently explained. But to achieve that kind of trust, “you need to understand where the founders are coming from – the sacrifices they had to go through to build their business.” Startup companies hire for “fit” into a company culture that celebrates and demands risk-taking – a quality not typically associated with lawyers. So when startup CEOs recruit their first in-house attorney, they look for someone who can replace “no, because,” with “yes, if.” 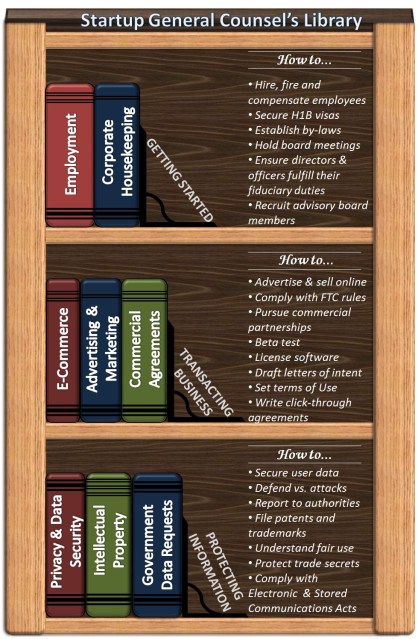 Why Do Startups Hire Their Own Lawyers? “Lawyers are not engineers. They don’t reliably produce products on a daily basis, but instead provide a strategic, long-term value proposition focused on smart growth and risk-management,” explained one Startup General Counsel (GC).

A typical assignment for a startup GC arises when a business idea confronts the question: how can we do this legally? The answer generally falls into one of several categories: how to protect intellectual property; how to hire, fire, and compensate employees; how to hold regular board meetings and ensure company officials honor their duties to shareholders; how to advertise in compliance with federal rules; how to enter into agreements to partner with other companies; how to maintain user privacy; how to sell things online; how to respond to government requests for user data.

GCs pride themselves on their ability to “get smart fast” on legal issues facing the company (it helps that they no longer get paid by the hour). When getting smart fast is either not smart enough or not fast enough, the general counsel acts as a savvy procurer of legal services by knowing which lawyer to hire for what and how much to pay.

As one explains, “I ask myself, ‘can we stage the legal costs?’” Another adds, “I come in with some very basic questions and I say, ‘for the love of god, don’t write me a memo. Let’s contain the legal costs to X.’ Then it’s lather, rinse, repeat. I do some more research and see if I need more from outside counsel after that.”

When Do Startups Hire Their First Lawyer? Conventional wisdom indicates that a startup’s first lawyer will have had four to 10 years of experience in a broad-based corporate practice, preferably one where the clients were themselves startup companies. Less conventional wisdom exists on the subject of when a startup company should hire that first in-house lawyer. Some startups look for a cost-benefit threshold of legal bills (about $300,000) that can be managed by bringing someone in house. Some see company size as the relevant metric, with one GC asserting that once a company has 10 employees, it should be hiring a full-time operations person to handle Chief Operating Officer duties (often times a lawyer who is not referred to as solely “general counsel”).

How do Startup General Counsels Work? At a startup company, speed counts. Driven by an ethos of “trust but verify,” many Startup GCs stress the importance of following their instincts. “You can say what you think and then go back and check. Things are moving fast, so the mostly right answer today is better than the perfect answer tomorrow.”

As a result, the single most important tool for a successful startup general counsel is a big rolodex. “Google is great. Friends are better,” quipped one GC, but Google remains first stop in the standard three step process of “Internet research,” “outreach to the legal network,” “hire outside counsel.”

As one startup lawyer puts it, “I’ve come to realize that every answer in the world is out there [on the Internet]. The decision is whether or not to spend the time finding it.” Internet research is important in priming the set of questions to ask one’s colleagues, because they have other priorities as well. “You need to pick your spots” when asking colleagues for help. One way to pick more spots is to grow your network. One General Counsel created a group of local general counsels upon being thrown into a job which seemed overwhelming at first. “I said let’s share information – you go first!” Another General Counsel joined the local State Bar Association’s corporate counsel group. “I now have buddies around town.”

A good startup general counsel has a keen grasp of what former Defense Secretary Donald Rumsfeld termed the “known knowns,” “the known unknowns,” and the “unknown unknowns.” Generally, all litigation is farmed out. Further, a general counsel may seek insight from outside counsel in case of lack of experience, or lack of time. Sometimes, it’s a lack of stomach for the attendant risk: “We’re not taking any heavy actions without getting ‘adult supervision.’”

How do Startup General Counsel’s Interact with the CEO? Being perceived as the “no guy” ranks among a startup general counsel’s top fears. “You don’t want to be the guy at the end of the hall that just says ‘no,’ because eventually people don’t incorporate you into the conversation.” Another explains, “if you want the CEO to trust you, you need a track record of not always saying no.” Some general counsels have even eliminated “no” from their vocabulary. “It’s not the GC’s place to say no. It’s the GC’s place to expound on the risk and if there is something that is super risky, make that clear, but leave the call to the CEO.” A problem-solving stance and a deep understanding of the company’s product help GCs avoid unnecessary nos.

More than avoiding trouble, some GCs see their understanding of public rules and perceptions as an opportunity to lead. One GC explained that he filters his own legal advice through the lens of the customer: “If you’re reading [the customer] correctly,” and you have an internal reputation for doing so, your legal advice, whether restrictive or progressive, “will be an easy sell.”