As the app stores fill up, it’s getting ever more expensive for developers to acquire new users. The cost to acquire a loyal user, or one that opens an app three times, grew from $1.30 in 2012 to $1.62 in 2013. Meanwhile, app downloads over 2013 broke records, though the download growth has been slowing, as previous reports have pointed out, indicating that some maturer markets are nearing their saturation point.

However, as app marketing platform makers Fiksu point out, while the percentage slowdown may be accurate this year, it’s based on a larger and ever-increasing raw number of total downloads. In December 2013, for example, the company has been predicting somewhere between 6.6 million and 7 million daily downloads on its own Competitive Index.

The index represents the number of downloads per day of the top 200 free iPhone apps.

That ~7 million figure will be the highest volume since Apple banned automated downloads (bots) in the beginning of 2012. Those downloads are also why Q1 2012 was as large as it was – it’s likely that a good many of the earlier downloads were not real, notes the company. This could, perhaps, somewhat temper Flurry’s earlier findings, which stated that the sizable number of Christmas Day downloads seen in 2011 and 2012 (more than a twofold increase in Christmas Day downloads vs. other days in the first three weeks of December) was not visible again in 2013. But it wouldn’t be the only explanation for a cool down, of course, as the “bot ban” was enacted in February 2012 – meaning that last Christmas was already in the post-bot timeframe.

Flurry’s data could also skew more toward the long-tail, as it’s based on apps using its SDK, while Fiksu’s Competitive Index uses apps in the top 10 and plots the full curve to get to their numbers.

With more downloads overall, and a smaller spike in new device activations over Christmas 2013, a plateauing may be expected. 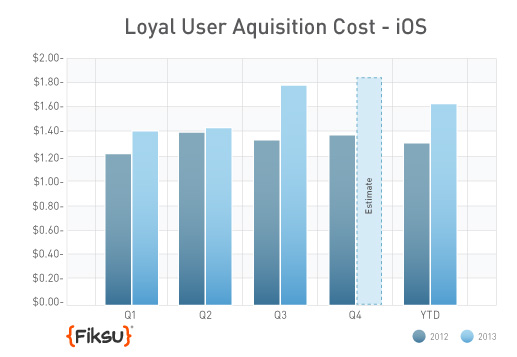 The App Store this year topped a million apps and smartphones became nearly ubiquitous in developed markets, making it increasingly costly for developers to acquire new users. Fiksu’s Loyal User Acquisition Cost Index, which measures the cost in acquiring new users who will open an app at least three times, has grown over the course of 2013, as well as year-over-year. In Q1 2013, user acquisition costs were around $1.40, up from 2012’s $1.25. By July, costs were breaking records, making July the most expensive month since December 2011.

This year saw a number of new apps in the Top Charts, including FitBit, Candy Crush, QuizUp, Temple Run 2 and others that weren’t around in 2012, each generating millions of downloads on their own. For well-known hit makers, hitting one million downloads is now par for the course.

The steady overall growth may be cause for concern – at least for smaller developers hoping to find their way to the Top Charts, which are tough for newcomers to break into. For consumers, this means in 2014, we might see more of the newer, younger companies trying darker shades of “growth hacking” as a way to find initial traction. Be warned.