It’s not uncommon to search the Google Play app store and find a number of knock-off or “fake” apps aiming to trick unsuspecting searchers into downloading them over the real thing – especially when the app in question isn’t yet available on Android. But one developer really went out of his or her way over New Year’s to fill the Android app marketplace with a number of rip-offs of big-name startups and other tech companies, including IFTTT, Slideshare, Snapguide, Wolfram Alpha, Fiverr, Upworthy, MySpace, and more.

Many of the apps chosen are still iOS-only, making the matter worse.

Listed under the developer’s very generic name, “Premium App,” the knock-offs sometimes have a “U” following the app’s title, indicating that they’re really just a user’s guide to the service, not the real app. Many, like IFTTT, (which Premium App has ripped off twice – once as “IFTT” instead of “IFTTT” to capitalize on misspellings), are available as paid downloads ranging from $1.36 USD to $2.75 USD. 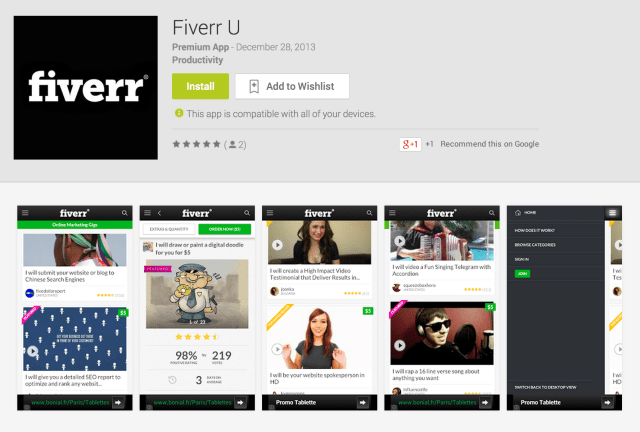 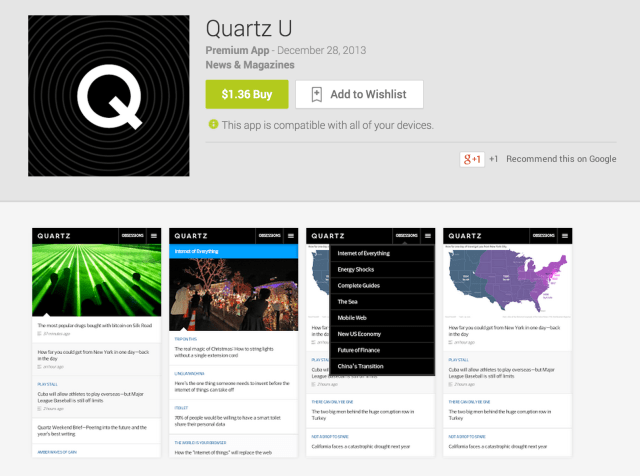 The apps were released just at the end of December, as the developer was probably hoping to capitalize on a reduced staff handling Google Play app store spam complaints over the holidays. Calling attention to the problem – as we’re doing now – will likely see the apps quickly pulled as Google reacts to the situation. (We reached out to the developer via email, but have not heard back.)

However, the fact that these apps were ever allowed in the first place – for nearly a week in some cases (at least, so far) – highlights a still ongoing problem with the Google Play review process…or rather, the lack of one. This issue has been happening for some time, too, and it’s concerning given that malware is often served up by the faked versions of popular apps. Now, whenever I’m searching for an Android app, I notice I’m always giving it a second look to make sure that I’m not being fooled. Mainstream, less savvy users are probably not as careful, which means they’re the ones getting burned.

As one confused user writes under the fake IFTT app, “Did this app really just come out today? Dec 30,2013?? The day I downloaded it? Seems unlikely. It said 2011 a minute ago. Is this app just a browser?” 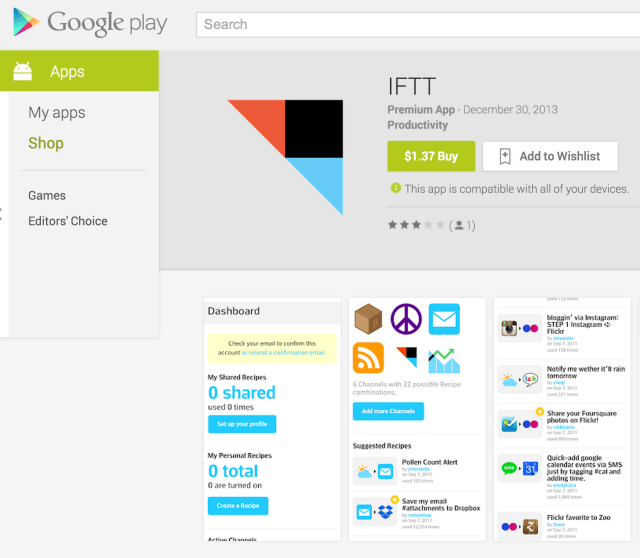 But as Google explains in its Developer Distribution agreement, the company “does not undertake an obligation to monitor the Products or their content.” (Products, meaning apps.) Instead, Google may remove apps from the store when problems are brought to its attention. That means legitimate developers, in addition to their very many other tasks, have to keep an eye on Google Play to make sure no one is trying to rip them off, and then submit complaints when someone does. At times, Google will also run a massive cleanup of its app store, dealing with the situation in one fell swoop, as opposed to carefully reviewing apps one-by-one.

It’s not like Google doesn’t have staff paying attention to its app store in a more proactive manner. After all, the company was fairly quick to eject the CyanogenMod installer app, which allows users to completely modify standard Android, plus add new features. But unlike modding, fake apps aren’t an immediate threat to Google’s monetization and control over Android like CyanogenMod is, they’re only a threat to the end user’s experience, security, privacy, and…hey, wait…isn’t that enough to warrant more attention, Google?