This year, several notable apps that connect users with house cleaners have launched or gained traction. These include Homejoy, Exec and laundry service Prim. There are a lot of benefits to hiring a professional cleaning service but, unfortunately, I live outside the area covered by these apps. Letting people I don’t know into my apartment also makes me feel exposed. I just don’t like having strangers judge my lovingly curated collections of masking tape, dolls, and whiskers shed by my cats over the years. But I do enjoy living in an (occasionally) neat apartment and my New Years resolution is to develop chore routines that will make housekeeping easy and stress-free by using these iOS apps. 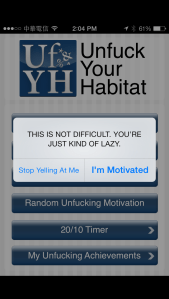 Its nifty features include a “To-Unfuck List,” or your personal list of chores, unfucking challenges for different rooms, a built-it in timer that balances 20-minute unfucking sprees with 10 minute breaks, and Facebook integration so you can share your unfucking achievements with your friends.

My favorite part of the app, however, is the Random Unfucking Motivation button, which is like a verbally abusive fortune cookie that says things like “NICE ASS. NOW GET OFF IT.” and “MY NANA WOULD BE SO ASHAMED OF YOU.”

The Unfuck Your Habitat app is an offshoot of a popular blog of the same name, with inspirational before-and-after photos of real homes, not domiciles that look like they were ripped out of Domino magazine. 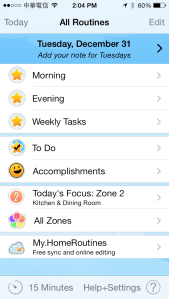 If you are looking for an app with less swearing, try HomeRoutines, which is relatively pricey at $4.99 but provides a very thorough list of cleaning tasks for every part of your residence. Another helpful feature is My.HomeRoutines, which gives you the option of creating an account to back up your data and edit it on HomeRoutine’s site. HomeRoutines also syncs across different devices, which means you can share your account with family members and roommates.

The app lets you create to-do lists and then rotate tasks by day or week, so you develop a routine that makes keeping your house neat relatively mindless. HomeRoutines splits your home into five zones and gives you a list of tasks for each area. This is handy as a reminder for small tasks that often get overlooked, like dusting baseboards. 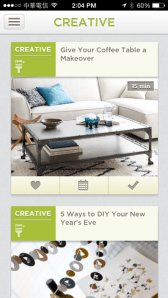 If you already have a chore routine in place, but want to figure out better and more efficient ways to organize your home, then try BrightNest. The free app builds a customized list of projects for you based on whether or not you have pets or kids, the appliances or spaces you have to take care of (I appreciate this because I rent an apartment and don’t have to deal with stuff like basements, swimming pools or water boilers), and what your goals are. For example, do you want to make environmentally-friendly alternatives to commercial cleaning solutions, find craft projects or learn some money-saving tips?

BrightNest can also give you home maintenance advice based on your region’s climates, but only if you enter a zip code, so this feature doesn’t work if you don’t live in the U.S. or prefer not to divulge the area where you live. Unlike Unfuck Your Habitat and HomeRoutines, BrightNest also requires that you sign up for an account using your email or Facebook login.

If you are comfortable creating an account, BrightNest is the most attractive of all the housekeeping/chore apps I’ve tried so far. Weekly projects are illustrated with photographs and an estimate of how much time they will take. Some of them are pretty obvious (I really don’t need yet another closet organizing guide), but there are many fun and surprising tips, like using leftover tea or tea leaves as a cleaning agent. BrightNest doesn’t give you a list of routines, but you can create your own schedule with its projects and opt for reminder emails.

Do you live with sloppy roommates that you are planning to strangle? Instead of killing them, try Chorma. It’s an easy app that lets you create lists of repeating chores and then assign them to your “housemembers,” who can check-in with their progress. To keep people from slacking off, you can create individual or group rewards that are redeemable once all tasks are created, but this feature is only available if you subscribe to Chroma Pro for $1.99 a month or $19.99 a year per household.