Apple’s new Mac Pro is a sight to behold: In black aluminum with an eye-catching cylindrical design, there’s little chance you’ll ever mistake it for any other computer. The previous Mac Pro was iconic too, of course, but this one is also just slightly larger than a football and dimpled on the top with a recess like a jet engine. But the true power lies under the hood, and what’s contained therein will satisfy even the most pressing need for speed.

Few would argue that Apple’s design for the Mac Pro isn’t unique. It’s been compared to Darth Vader’s iconic look from the original Star Wars movies, and in a less flattering light, called the “trash can” Mac. But when you actually have one sitting on your desk, it’s a very different story. The aluminum surface is cool to the touch, reflective without being shiny, and – somehow – astoundingly reassuring.

It’s the modern monolith of desktop computing, and indeed it does harken forward to a future age where the amazing engineering contained within is required for your everyday computing needs.

As it stands, of course, the computer housed within that sleek black shell will obliterate any task thrown at it by all but the most extreme and demanding of professionals. Apple might not be as fond of the so-called ‘moonshot’ as competitors like Google, but it gives great immediate futurism with the Mac Pro in terms of both design and performance.

The modularity of the new Mac Pro is not the same as it was with the older versions. You won’t be swapping 3.5mm HDDs out of bays, for instance. But the outer shell slides off easily once you’ve unlocked it, and you get full access to the RAM bays (upgradeable to a maximum of 64GB via four 16GB modules), as well as to the SSD units (which, while Apple-specific, are upgradeable too) and the GPUs (also theoretically replaceable with future Apple-specific hardware). But the real modularity comes via the external I/O: Thunderbolt 2 can theoretically display 4K video while simultaneously transferring it thanks to a unified 20 Gbit/s throughput rate, and there are six ports on the back, combined with four for USB 3.0.

This, combined with the unique thermal core Apple has created, makes for an incredibly small, quiet professional workstation machine. In testing, I couldn’t hear it unless I put my ear up close, and even then it’s a relatively quiet hum, not even close to the fracas my Retina MacBook Pro makes when it’s doing heavy lifting. It breathes a light exhaust of air through the top, too, which is actually a nice refresher if you’ve been slaving away in Final Cut Pro all day.

For the layperson or everyday computer user, the new Mac Pro will seem like a thought-based computer, where virtually every input action you can think of results in immediate response. Whether it’s the Xeon processor or the super-fast PCIe-based SSD or those dual workstation GPUs, everything seems slightly but impossibly faster than on any other Mac, even the most recent iMac and Retina MacBook Pros. To be honest, it’ll be hard to go back even for everyday tasks like browsing the web and importing pics to iPhoto.

For me, Final Cut Pro was bound to be the wrench that would otherwise throw my existing Mac setup some trouble. On the Mac Pro, FCP X ran like a dream, rendering and publishing in the blink of an eye. I had to pinch myself to prove that I wasn’t dreaming after it took fewer than 10 seconds to render and publish the final edit of a 1080p video a little over two minutes long. And again, nary a peep from the Mac Pro itself.

For the super nerdy, you can check out the Geekbench scores of the new Mac Pro we tested here and here. Remember, this is the baseline, entry-level version without any customization options, so it’s the bottom of what you can expect in terms of performance.

The Mac Pro has some unique abilities that you won’t find in any other Mac, including the ability to power up to six Thunderbolt displays at once. I ran two Thunderbolt Displays plus a 21-inch iMac, as well as a Wacom 13HD through the HDMI port, and Apple’s premium machine didn’t even break a sweat. This is definitely the computer for the video producer who wants to be able to monitor output in real time while working on some raw video at the same time, or the information addict who feels they just aren’t getting enough with the two or three displays that represent the maximum possible output with a MacBook Pro or iMac.

Another great feature is the upgradeability, which ensures that, as futuristic and ahead-of-the-curve as this Mac already is, it’ll be even more future-proof thanks to the ability to swap out components down the road. Apple hasn’t revealed any details about later upgrade kits, but it’s reasonable to expect that RAM, SSDs and even GPUs will be available for those who feel they need even more out of their maxi Mac. 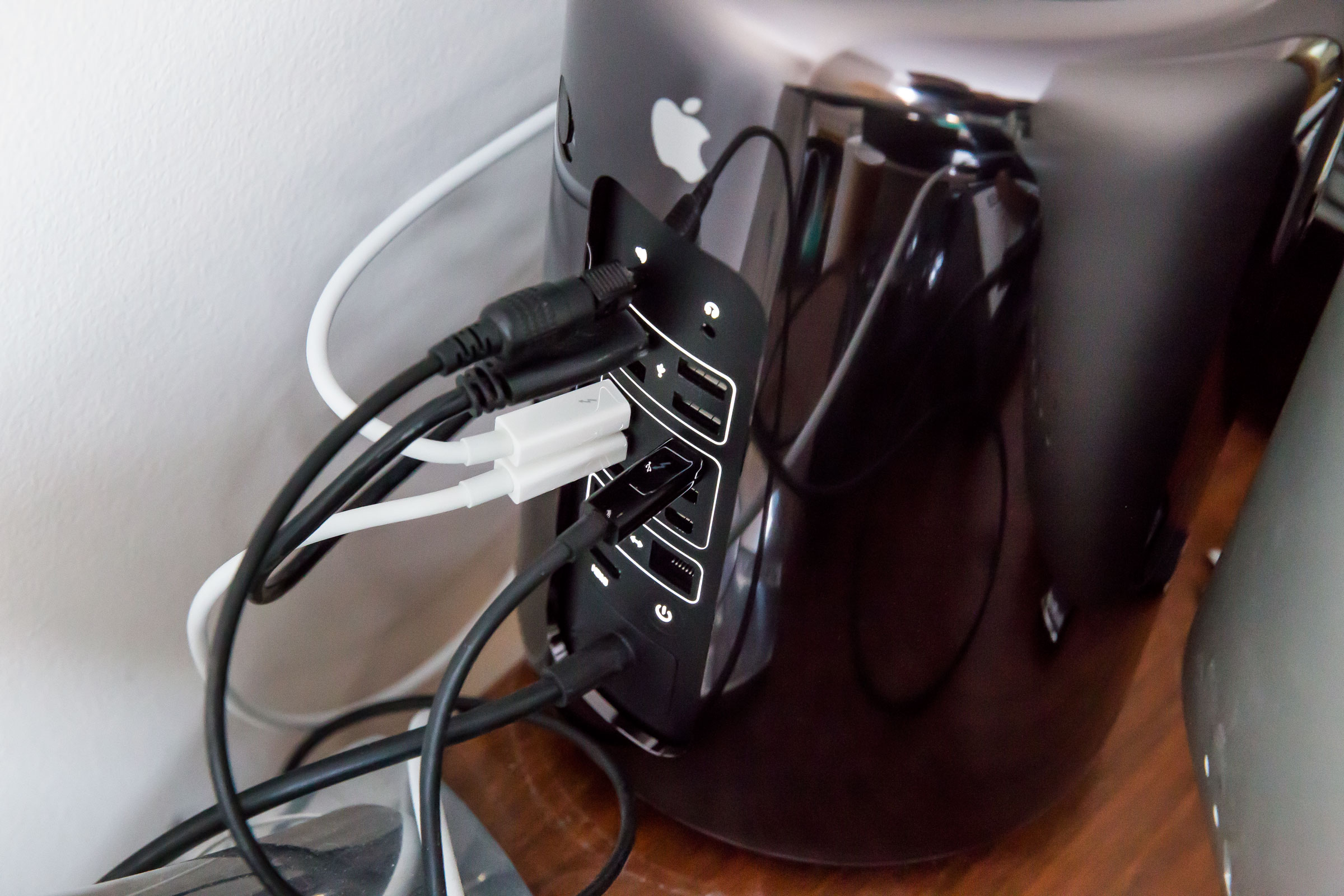 One final subtle but very nice feature is the auto-illumination of the ports that happens when you move the Mac tower itself. It’s extremely useful for helping you plug the right device into the right port when you’re looking to add new devices, and likewise when you’re looking to unplug something. This kind of attention to detail only reinforces that if you have $3K to spend on a Mac, your money’s in good hands with Apple.

The Mac Pro is almost absurd in terms of its abilities. It’ll blow away any ordinary computer user, including one with even slightly advanced demands like myself (occasional video editing, plenty of Photoshop, some digital graphics and podcast production). But in reality, my Retina MacBook Pro wasn’t straining under the demand of my needs, either – the Mac Pro merely makes it all seem effortless.

That said, it’s rare that a computer is an investment; mostly these days, you buy one with the expectation that you’ll probably need another in two years’ time. The Mac Pro, somewhat like the iPhone 5s, is designed with the future in mind, so that video producers who aren’t working on 4K but will be expected to in a few years don’t have to reinvest.

For anyone who’s been looking forward to a replacement for their aging gray tower Mac Pro, and for anyone who has the money and is willing to spend it, the Mac Pro is a no-brainer, but for the rest of us, we needn’t reach quite so high to touch the sky when it comes to Apple’s line of OS X hardware.