Google hit back hard today after it learned lyrics site Rap Genius had been using dubious SEO tricks to attain top spots in search results. Now RapGenius.com doesn’t appear on the first page of results for a search of “Rap Genius,” and popular queries like “Jay-Z Holy Grail Lyrics” don’t bring up the startup like they used to. [Update: But the two companies are working on a resolution.]

Founded in 2009, Rap Genius is a lyrics and text annotation site. It lets users provide their own explanations for song lyrics, religious texts, legal documents, images, and more that other users see when they hover over snippets of text hosted on the site. The startup lept into the limelight when it received a massive $15 million investment led by Andreessen Horowitz in late 2012.

Known for their foul mouths and outrageous behavior, the Rap Genius founders had been riding high over the last year as their site climbed to prominent and lucrative slots in Google search results. For a sense of how ridiculous these guys are, check out our onstage talk at TechCrunch Disrupt NY where founder Mahbod Moghadam apologizes for telling Mark Zuckerberg to “suck his d*ck”.

But earlier this week, Rap Genius invited bloggers to join its “Rap Genius Blog Affiliate” program. John Marbach, the founder of email filtering startup Glider, emailed in asking for details, and Rap Genius offerered to tweet links to his blog in exchange for him placing a series of links to Rap Genius’ Justin Bieber lyrics on his blog. The links were designed to trick Google into giving Rap Genius better result rankings on searches for lyrics to songs from Bieber’s new album — sure to be popular searches this season. 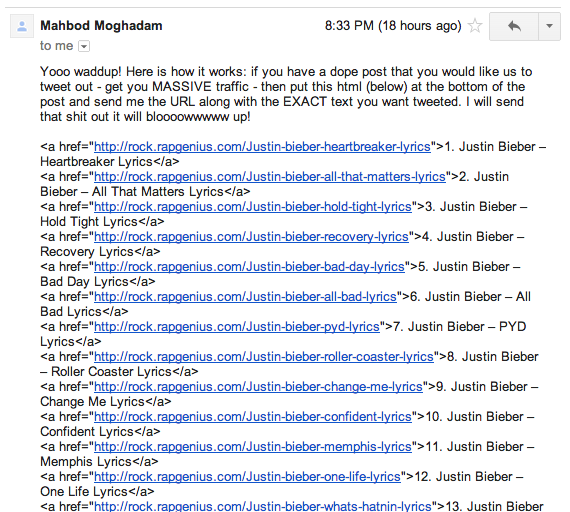 Marbach then revealed Rap Genius’ unscrupulous tactics by publishing the email it sent him in a widely read blog post, prompting Google’s webspam czar Matt Cutts to announce on Hacker News, “We’re investigating this now.” Rap Genius apologized in an open letter to Google, asking for the entire lyrics site category to be examined, implying shady SEO tactics were common amongst its competitors. 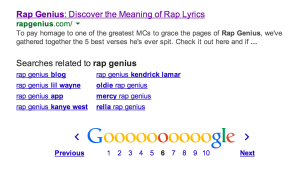 That apology doesn’t seem to have gotten it very far, as Google this morning practically swept Rap Genius out of its search results. Previously, Rap Genius was appearing at the top or close to the top of search results for queries of popular rap songs and the word “lyrics,” for example “Kanye West Flashing Lights Lyrics.” It would even sometimes appear high in simple searches for artist and song names.

Now, you won’t find Rap Genius for that query until the fifth page of results, likely further than anyone would look. For evidence of how serious the punshment is, adding “Rap Genius” to the end of that query actually makes Rap Genius appear even deeper down the results on the sixth page.

And just to make sure it was clear, Google banished RapGenius.com to the bottom of the sixth page of results of searches for “Rap Genius.”

Becoming practically unsearchable could be a huge hit to Rap Genius’ business, which depends on Google search referral traffic. Without that traffic, it will be much harder to grow its user base, collect new annotations, and potentially monetize with ads down the road.

Whether Google’s reaction was too tough is a matter of opinion. Gaming search results with spammy SEO tactics is certainly deplorable, but wiping Rap Genius off of top result pages for queries that include its own name is pretty harsh. Whether the startup deserves it or should get a lighter punishment depends on your perspective regarding the sanctity of Google search results. We’re awaiting a response from the Rap Genius founders, and have been promised a statement shortly. 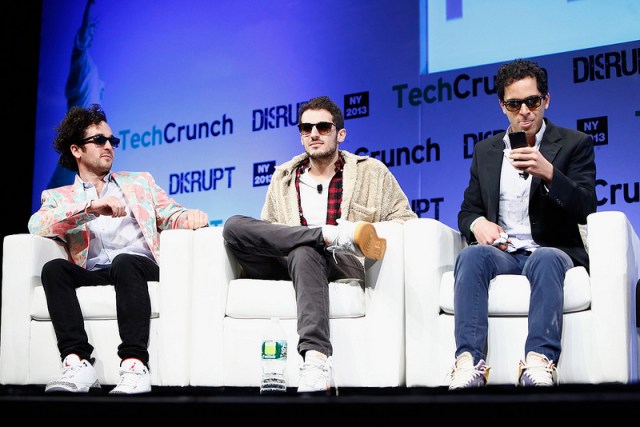 “We are working with Google right now to resolve this. They’ve been really great, helping us identify changes we need to make, even on Christmas. We’re working on it as fast as we can, and expect to be back on Google very soon.

It sucks to be off Google for us and for the thousands of our community members who have worked so hard to create what’s often the best search result.

We hope everyone who reads this will take a little time out from their Christmas and head to Rap Genius and sign up so you can contribute your knowledge on your favorite subjects – becoming a member of our community makes the site way more fun. Merry Christmas”

Looks like Rap Genius and Google might come to some compromise where Google restores at least some of the startup’s search result ranking juice in exchange for it cleaning up its act. However, at least some of the decreased visibility is likely to stick around for a long time, impeding Rap Genius’ business. We’ll have more details on the outcome of the talks as soon as possible and we are awaiting a response from Google.

For more on the never-ending insanity and adventures of Rap Genius, check out: