Hulu was born on the desktop computer, and existed there for some time before it began appearing on portable and set-top devices. Part of that was Hulu’s ties to the Flash framework for DRM and other content-provider requirements.

But 2013 marks a watershed moment for the service as it says roughly 50% of its now 5 million Hulu Plus subscribers are streaming exclusively on devices. That’s not some on the desktop computer and some on tablets, it’s all on devices like phones, iPads and set-top boxes like Roku and Apple TV.

And more than half of all consumption on the service is done in the living room — a statistic that will warm the cockles of any cord-cutting enthusiast’s cold heart. 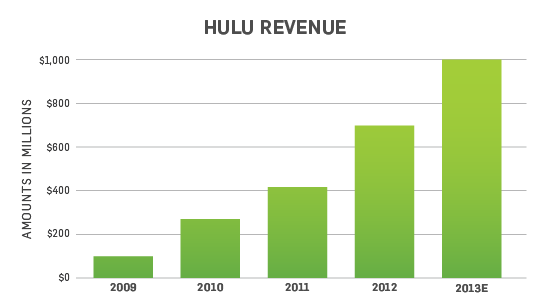 There are some other stats about growth in ads and content that you can read in the post but the devices statistics were most interesting to me. There are dozens of startups and companies who are trying to crack the ‘second screen’ experience in one manner or another. Turning tablets into companions to TV programs or services like Twitter into back-channel conversations on live events has become the genesis of a thousand product launches.

But — at least according to Hulu’s statistics — the second screen may have actually turned into the first screen when no one was looking. The shift is an important one for anyone looking to capitalize on user viewing habits on portables.

However, as Hulu’s viewers shift from the PC to ‘devices’, portables are not getting an equal share of the viewing. Remember, Hulu says that ‘half of consumption is done in the living room’.

Hulu is solidly in cahoots with the providers of its content — it offers shows after they air on TV. But that may not matter as much any more as users are trending towards bingeing on shows, rather than catching each one as they air. The living room stat will be one to watch in 2014.