Last week, the media world was abuzz with the news that e-commerce giant Amazon was experimenting with a new program dubbed “Amazon Prime Air,” which would use small automated “drone” aircraft to make customer deliveries. But while Jeff Bezos’ primetime television announcement of Amazon’s drone ambitions certainly attracted a lot of attention, it’s important to note that he is not the first person to express interest in the drone delivery space.

A small Silicon Valley startup called Matternet has been developing drone delivery technology for several years now. The company’s co-founder and CEO Andreas Raptopoulos’ TED talk from this past summer about the potential to use small drones for delivery purposes has garnered more than 200,000 views since it was posted online last month — and perhaps helped to inspire Bezos himself, as Bezos used some of the same language used in Raptopoulos’ TED talk when unveiling the concept of Amazon Prime Air on 60 Minutes. 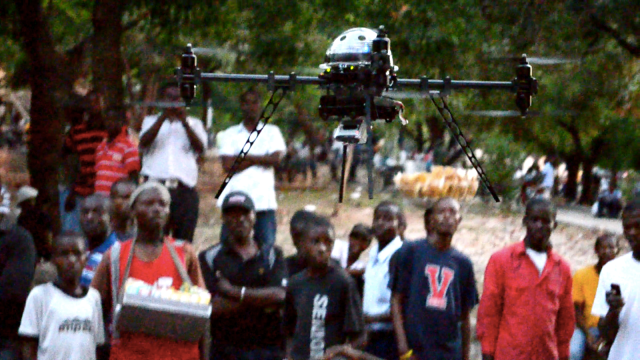 An image from Matternet’s drone delivery pilot in Haiti

One very interesting thing about Matternet is that the company believes drone delivery technology should be first used in the developing world, to deliver food, medicine, and other necessities to areas that are less accessible by car or truck. Often, consumer technologies start by serving a higher end market and trickle down to attain widespread utility — think computers, cell phones, automobiles, and the like. Matternet says its approach is to introduce drone delivery technology to the “people who need it the most,” and build the network from there.

It was a pleasure to have Raptopoulos and his Matternet co-founder Paola Santana stop by TechCrunch’s San Francisco headquarters last week to talk more about how their technology is progressing, the unique technical and regulatory challenges that drones face, and their reaction to learning that Amazon is working in the space as well. Watch that in the video embedded above.

And in the video embedded below, you can see footage from one of Matternet’s drone delivery pilot programs in Haiti.

Matternet in Haiti from Matternet on Vimeo.