The iPhone 5s is doing pretty well in terms of sales numbers, and has just passed 10 percent usage rate among iPhone models according to mobile analytics firm Mixpanel. That’s a significant milestone, because it means that users are adopting the iPhone 5s at between two and three times the rate they got on board with the iPhone 5. And the iPhone 5c, while trailing the iPhone 5s, is actually doing better than many might expect, too. 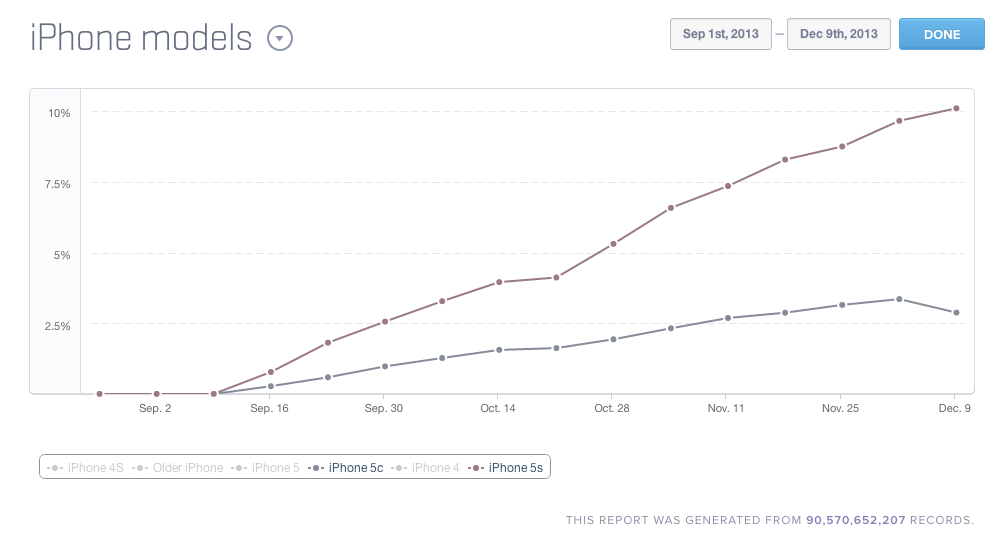 The 5s is still far and away the hotter device, according to Mixpanel and other sources, which is good news for Apple in terms of average selling price since it sees relatively high margins on the manufacture and sale of those devices according to industry estimates. And the 5c’s adoption rate is in keeping with predictions that it’ll be more of a slow-burn device, getting picked up by less tech-savvy consumers who are happy to wait until their contract expires to upgrade.

Between the rapid adoption of iOS 7 and the relatively quick uptake of the new iPhone models, Apple’s doing a great job of getting everyone on board with the same platform, and on the most recent version of both software and hardware. That’s a huge boon for developers working on software for the devices, and of course it should also provide a very convincing counter argument to critics who say that Apple may have reached a ceiling in terms of how much further it can push its smartphone business growth. The really interesting numbers will come when Apple reveals its next quarterly results at the end of January.