Good morning and how do you do? Do you enjoy all of your limbs and organs? Good! Keep them healthy because these Dystopian War Robots are sure to want them when they come to power.

To begin with, we present the two-armed worker robot from Seiko Epson. Designed to work a great deal like the now-famous Baxter, this robot will be available in 2016 and be used to help – and later harm – factory workers in their daily tasks. It can be trained to assist – and later assault – its human counterparts and is, for the time being, called “the autonomous dual-arm robot” and will later be called “My lordship.” 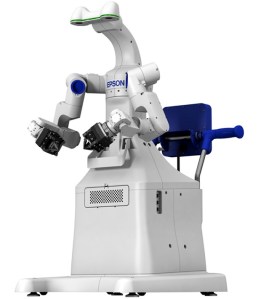 It seems, however, that our own lovable Baxter is seeing the competition creeping up and is doing more to assimilate. For example, Active Robots is offering a program for Baxter than will allow him to solve a Rubik’s Cube with nary a whimper. The robot will methodically make all the colors match – and smile the whole time – while viewers are lulled into a dull sense of safety. Then he will pounce. Oh, how he will pounce.

Finally we have a charming bipedal robot from the University of Michigan. Named MARLO, this old girl can traipse around like a two-legged, high-stepping heifer until it’s time to start doing a little face stomping on the front lines of the human/robot wars. The revolution will be televised and Margo will probably be holding the camera. Until next time, wet spots, keep your eyes on the skies!