Way back in the ancient prehistory of 2009, Foursquare made its first foray into push notifications, at a time when using push at all was still rare. Two years later, it made an attempt to capitalize on those notifications with a vision of an app that would alert you proactively when you were near neat things to do, eat or see.

Unfortunately the world — and smartphones with their anemic battery life — weren’t quite ready for Foursquare’s Radar.

Now, after a limited pilot over the past couple of months, Foursquare is delivering location aware push notifications to all of its users across iOS and Android. The new alert system is launching in version 7.0 of the app, alongside a series of visual refinements that make the app more scannable and place the bits of info that you’ll find most useful right at the forefront.

“Our goal was to give users the best signal without impacting battery life,” says Foursquare VP of Product Experience Jon Steinback. Foursquare has been adjusting that and balancing out the needs of the battery and the limited attention that users have to give up to one of the many apps on their devices.

Steinback says that any time the Foursquare app reaches out to the user with information, it must be “something that makes your experience better.” To that end, the company has been investigating which notifications have elicited the most response from users. The most relevant and lowest hanging fruit by far has been the ‘when you get there’ signals. 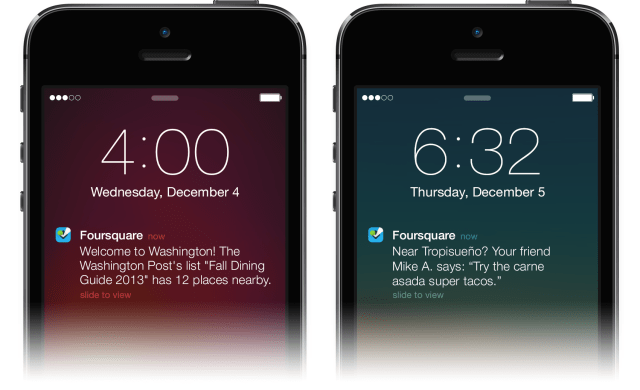 The asada is actually pretty great at Tropisueño

When you arrive at a restaurant, for instance, Foursquare might alert you to what the best dishes are to eat at that location. When you land in a new city on the plane you might get a notification that spells out places to try, or that your friends have tried. When you trundle into a new neighborhood you might get a list of the best local places to check out.

Notably, the new Foursquare notifications do not take advantage of Apple’s new iOS 7 backgrounding APIs to work their battery saving magic. Instead, the team has been tweaking and prodding the feature over the past two years to use as little juice as possible. Foursquare is investigating using the new frameworks and Apple’s M7 chip in future releases, but that’s not in this release. 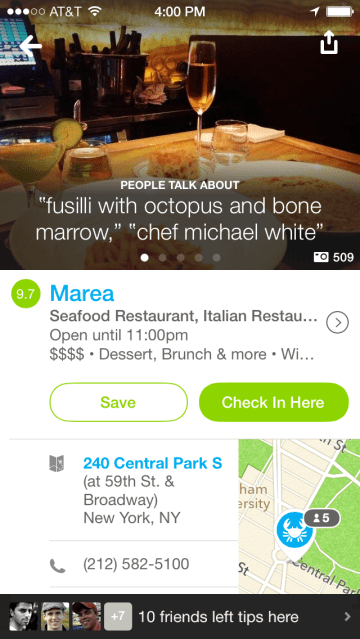 These notifications, though they’re something that Foursquare has been working on for years, play into a larger current trend. As wearable computing becomes more prevalent and our phones gain contextual awareness, we’re going to be relying more on proactive recommendations and alerts, rather than a device that waits for us to pull it out of our pockets to ask it questions. Google Now, with its constant monitoring of your personal data cloud and location-aware alerts is a prime example of this, and there are some very smart developers playing with programmatic push notifications that learn from user interaction and react accordingly.

We’re just at the beginning of the ‘push’ era, backed by context gathered from our data and information gathered by our pocket computers. Foursquare is a hearty participant in this, which i’m happy about, as I’m a regular and pleased user of the app. 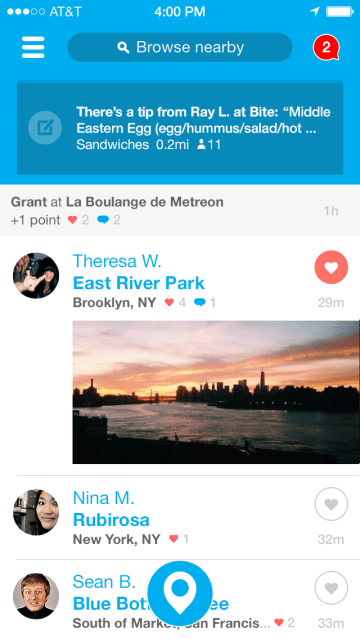 I don’t think it’s a coincidence that Foursquare found the ‘highest signal’ notifications ended up being those that were sent as you ‘arrived’ at a destination. This is just my experience, of course, but I rarely open Foursquare in my home town. In a bigger city with a constantly evolving cadre of restaurants and venues, that might be different — but there are a lot of people living outside of urban centers, and their towns change a lot more slowly. However, once I begin traveling, the Foursquare app becomes a constant point of reference, and I’ve grown increasingly reliant on what I perceive to be accurate signals about things that it thinks I, personally, will like.

The visual changes in the app are designed to increase immediate value when you do launch the app. The listing pages have had their flow tweaked to emphasize large images at the top that are combined with the ’tips’ that people live. You can still drill down into those tips, but pairing them with images is a great decision, as I find a visual check of a place tells me a lot about whether I want to, say, bring my family there, or if it’s more of a dive I’ll go to when I’m alone.

When you open the app, you’ll also see a more compact and continuous feed of friends. There’s also now a running carousel of tips right above the feed that you can swipe through. The previous design had room for just one alert at a time, and Steinback says that there was so much activity on those that Foursquare expanded the opportunities to interact with them.

The update looks pretty great, to be honest. The design team at Foursquare is continuously iterating on the bones of the app, and rarely make a change that doesn’t make it better or prettier.

At this point, the Foursquare app itself is delivering pretty well on its early promise. But questions still remain about the company’s viability. It raised $41M in debt over the summer after rumors it was trying to raise a much larger amount at a $700-$800M valuation. No exact revenue numbers have been shared but investor Ben Horowitz told Fast Company that the company had brought in ‘more than four times’ the total from 2012, which led some to estimate a run rate between $15-$20M on the top end.

At the moment, Foursquare has a pretty stellar product that sits on top of an enormous treasure trove of location data. Foursquare’s API is one of the most widely used and holds one of the biggest and most accurate collections of point-of-interest not wholly owned by Apple or Google at this point. Foursquare is rumored to have a sharing deal with Apple already — as one of over a dozen contributors to Apple’s Maps data. But when you’re a company as old as Foursquare, with a well-developed and spelled out product — and yards of money in — the acquisition whispers are never far away. And Foursquare’s suitors have been rumored to be everyone from Yahoo to Apple at this point.

There are a bunch of ways a company like Apple could leverage Foursquare’s data and product, not the least of which is a replacement for Yelp integration.  But that’s 150 people and a bunch of money for more of what Apple’s already getting with its POI deal. Why buy the cow? Still, Apple has been on a tear trying to ‘own’ its core technologies, and point-of-interest and location data expertise certainly fall into that category.

Selfishly, I hope the company finds a way to make itself wildly profitable, just so I can keep using the app as an independent entity. I like my iPhone, but I also like the freedom to choose whatever platform I like — and still use services that make my life easier and more enjoyable. But in our increasingly siloed world, where the majors are hoarding apps and services like gold pressed latinum, I have my doubts. Still, this version of Foursquare is, yet again, the best ever — so we’ll see how it goes.

Article updated to clarify that a data sharing deal between Apple and Facebook has not been confirmed.