Facebook used to be a website translated to mobile by a tiny team, but over the last two years it’s reorganized to make every department in the company mobile-first, as revealed in two new org charts it shared today at a small press conference “Whiteboard Session” at its Menlo Park HQ. It also said its 90 open source projects have over 2,500 contributors.

Below you can see the old structure of the company, followed by the new one. 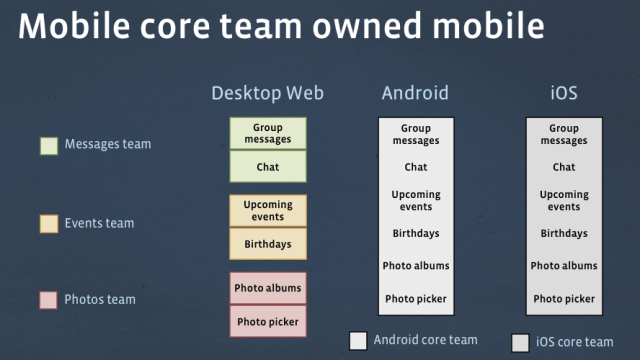 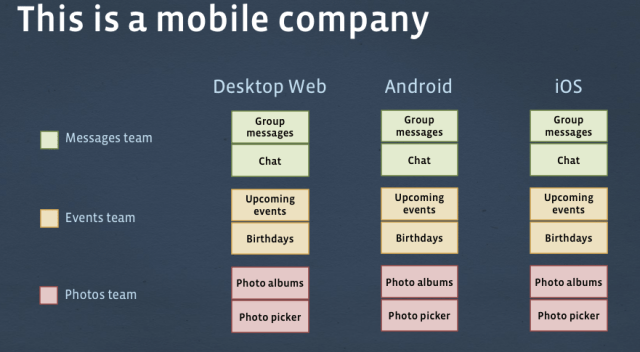 Note that these charts aren’t complete, as they don’t show all the products Facebook operates, or some internal teams like infrastructure and measurement. Still, they’re illustrative of the way the company has changed.

Here you can see that now, a core team handles each of Facebook’s major products, such as Messages, Events, or Photos across all interfaces. Not only does this allow a team to live and breathe their product, but since they maintain all the code for their product, they can reuse it on different interfaces.

Facebook’s head of mobile release engineering Christian Legnitto explains that with the old model, the Facebook mobile team was “constantly playing catch up,” but now he says Facebook’s iOS and Android apps are “mobile first and mobile best.”

Of course that sounds good in theory, though many of Facebook’s features still come to the web first. Most obviously, Facebook launched Graph Search in January 2013 and it’s still not even being publicly tested on mobile. That means it could be many more months before it rolls out to everyone — which is Facebook’s goal.

Facebook is driving a lot harder and faster on mobile than it used to be, though.

The new company structure also gives Facebook the resources to build critical mobile development infrastructure. For example, Legnitto showed off xctool, a replacement for Apple’s xcodebuild that makes it easier to develop iOS and Mac products. Legnitto said “Apple’s tools are good but they’re designed for the individual developer. Their tools started to fall over at our scale” referring to its 874 million monthly mobile users and 507 million daily mobile users. 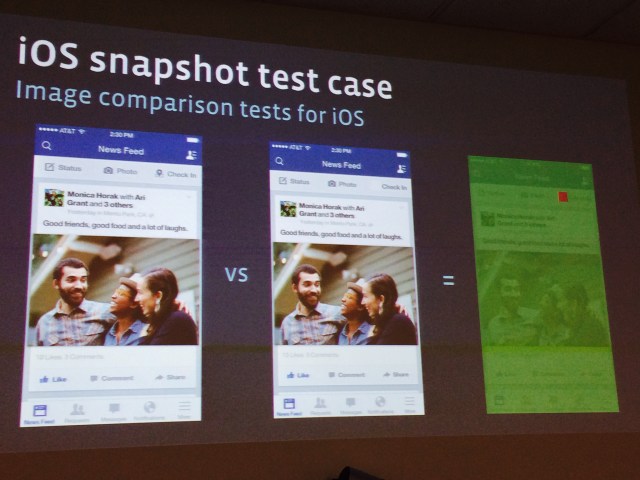 Facebook has been big on open source since the company started. James Pearce, Facebook’s head of open source projects, explained that Mark Zuckerberg relied on PHP, MySQL, MemCache, and other open source technologies to build Facebook way back in the early days.

Now, between Facebook’s web, data, infrastructure, and mobile open source projects, Facebook has 90 public open source products that have a combined 65,000 watchers. Its open source projects have been forked 15,000 times, have received 45,000 commits, and have 2,600 contributors who’ve signed Facebook’s contributor license agreement. Some of the projects that are most popular right now include JavaScript library React, big data engine Presto, and PHP executor HipHop Virtual Machine 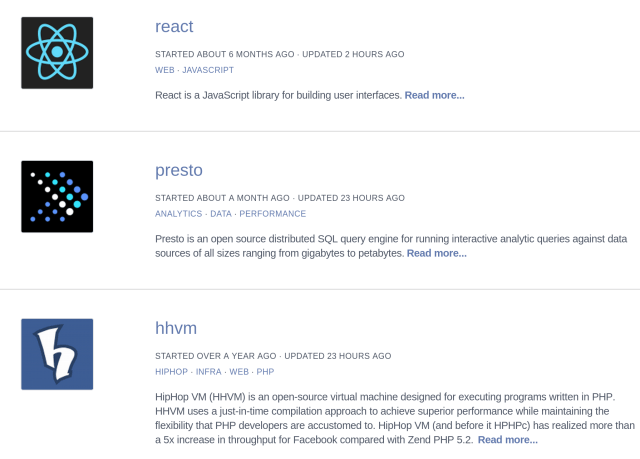 While Pearce says some of Facebook’s motives for its heavy involvement in open source are “benevolence” as well as an alignment with its mission to make the world more open and connected. But it’s also strategically smart. By enlisting the Open Source community, Pearce says Facebook “creates a virtual engineering capacity that goes beyond these four walls.”

As for user facing products, Facebook recently rolled out a big navigation redesign alongside iOS 7, and did a major overhaul of its Messenger app. The latter would have been a much messier process in the old organization, because Messenger is designed to bridge communication across the web and mobile.

This improved efficiency isn’t just some nerdy fetish for Facebook. It’s crucial to staying nimble as it competes with agile startups with low head counts and little baggage. With quick teams at Snapchat, WhatsApp, KakaoTalk pushing out rapid improvements to their messaging apps, Facebook needs this new organization if it wants to move fast on mobile without breaking too many things.