Applebee’s, the largest casual dining chain in the U.S., has signed a deal with restaurant tablet hardware and software provider E la Carte, which will see it introducing 100,000 tableside tablets to its locations starting in 2014, with the rollout completed by year-end. This represents one of the largest tableside tablet rollouts to date in any private enterprise, as Applebee’s serves around a million guests per day.

“Tablets are going to be in front of a lot more consumers at restaurants than they were before,” says E la Carte CEO Rajat Suri of the agreement with DineEquity, which operates the Applebee’s chain as well as IHOP.

There are 1,860 domestic Applebee’s restaurants, 99+% of which are franchise owned, the company tells us. While owners have freedom with vendor choice in some areas, in this case, the introduction of E la Carte tablets is not optional – though it’s one where the owners participated in making the initial decision.

The deal comes following a two-year pilot program where Applebee’s tested the tablets across 30 restaurants around the U.S. During these trials, the company found that having tablets available tableside allowed them to reduce the overall table turn time and transaction time for their guests, and guests who were surveyed about the tablets reported a better overall experience. 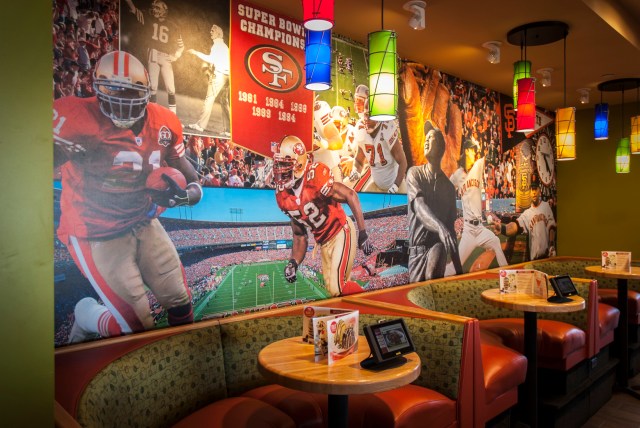 E la Carte has previously said that its Presto tablets help restaurants achieve 10 percent sales boosts, seven-minute faster table turns, and 9X increases in loyalty program sign-ups. Applebee’s doesn’t currently have a loyalty program, but this is something that tablets would now make easier to implement. In fact, the company is already testing a version of this program in some stores. Further down the road, that program could also be tied into personalized offers and suggestions, as the E la Carte system could remember customers’ past orders, likes and interests.

You may think putting tablets tableside puts wait staff at a disadvantage, as there could be a perception that staff is not working as hard as before now that customers enter their own orders and handle paying their own bill. But the reality is that wait staff generally accepts and likes having the devices around. That’s because the tablet checkout process suggests different tip options, based on percentages – similar to the NYC taxi cabs. This has been shown to increase the size of the tip, reports indicate, as leaving a decently sized tip is now easier than having to change the options on the screen to leave a smaller one.

According Applebee’s communications manager Dan Smith, the company is first using the tablets to showcase its appetizers, drinks and desserts menus – not the full restaurant menu. But the latter option will come in time. This will also allow the restaurants to reduce their print collateral, which today includes several extra menus, inserts and table caddy menus, which it will now cut down on.

Customers can use the Android-based E la Carte tablets to browse and add items to a cart, as if they were online shopping, and then pay their bill when the meal is over. In addition, the tablets include a dozen or so games to keep guests occupied until the food comes. There are a couple of free games and several 99-cent games including word games, a memory game, connect the dots and paint for kids, and more. Diners are also able to sign up for the company newsletter, and later on, may be able to control the restaurant jukebox (if available), too. The deal is notable not only as a big win for E la Carte specifically, but could set the stage for more restaurant tablet rollouts nationwide, given Applebee’s sizable footprint. “Everyone looks up to them,” says Suri. “When a group like this decides to [put tablets on every table, it’s a big statement to the entire restaurant industry that they believe tablets on tables are going to be the way people are going to dine in the future.”

E la Carte has been working on making tableside tablets a standard since 2008, Suri says, “so it’s a big moment for us.” The company, now a 55-person team, raised $13.5 million in Series B funding earlier this summer, reporting at the time that its tablets were processing over $6 million in orders and payments for its partners, including Genghis Grill and Evergreen Restaurant Group, a franchisee of Outback Steakhouse. E la Carte competes with other restaurant apps like Tabbedout, MenuPad, iMenu, Ziosk, and others.

Other large chain pilots are in the works, too, one of which may soon be IHOP. Though that chain has not started trials at this time, Smith said that’s now a possibility.