Kantar Worldpanel ComTech, the WPP market research division that provides a rolling check-in on how smartphones are selling in key markets, has put out its latest figures this morning covering the 12 weeks that ended October 31. It looks like the debut of new iPhones from Apple have given the company a “signficant bounce” in sales. But even with the launch of not one but two new models — the colorful 5c and elegant 5s — the impact of incremental upgrades has not been as strong as last year’s debut of the iPhone 5. All in all, Kantar says Android took 71% of all sales across 12 key markets versus 21% for the iPhone.

Specifically, in important markets like the U.S., Android took nearly 53% of sales. In Europe, Android accounted for nearly 71% of sales collectively across Britain, Germany, France, Italy and Spain. 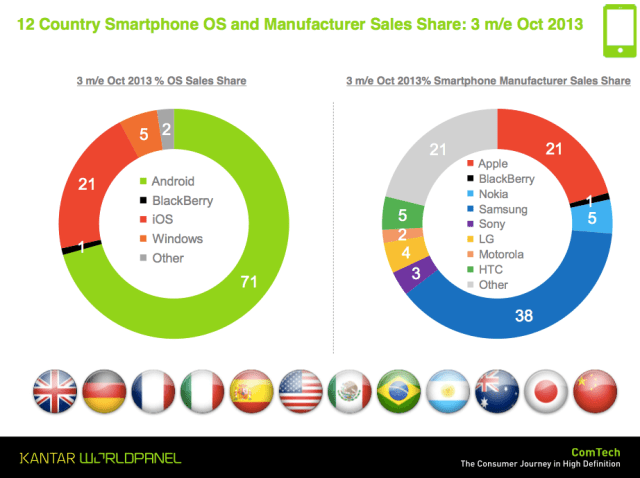 In comparison, last year’s iPhone 5 debut was strong enough that it helped Apple find its way to the top of smartphone sales in the U.S. over Android. This year, although some had predicted a similar spike, Android held off Apple at the pass, with Apple at 40.8% for the three-month period in the country; in October alone, however, Apple had 52.8% of sales.

The trend in the U.S. was played out across other markets as well.

“In almost all markets, the iPhone 5S and 5C releases have given iOS a significant bounce compared to the previous month,” analyst Dominic Sunnebo writes, pointing to “incremental releases” often seeing softer responses from the market. “Generally, Apple’s share of the market still remains lower than when the iPhone 5 was released, although this is not wholly unexpected as shoppers tend to react more positively to ‘full’ releases than incremental improvements such as the 5S and 5C.” (We’re embedding the tables and a graphic breakdown of shares country-by-country below.)

That’s not a universal picture, however: Apple continues to positively storm in Japan, where it is now at 76.1% of sales, thanks to NTT Docomo, Japan’s biggest mobile operator, now also carrying the iPhone.

On the other hand, certain countries in Europe continue to remain challenging for Apple. In Spain, for example, over 90% of handsets sold are Android devices. Apple, in fact, is now level with Windows Phone sales, at 4.3% (!).

A lot of this has to do with price. Even Apple’s “low end” 5c handsets are still priced at a premium compared to dozens of Android-based models that, even without subsidy, are under $150. (The iPhone 5c, sold unlocked today in the U.S., costs $549.)

And you have to remember that market share is not everything. Although it is important, particularly for mindshare among developers who you want to keep in your ecosystem, Kantar’s figures are for market share of sales in units, not value, and not profit. (This was something also pointed out last week in some analysis of the tablet market from Canalys, which noted that while Android was now passing Apple in unit sales, in the area of profit margins Apple was still the one to beat, by some margin.)

The UK market, which has traditionally been a stronghold for Apple in the region, is an example of how Apple may be content these days simply to continue selling well in the premium market, and leave the low end for the rest to fight over.

In Britain, Kantar notes, Apple took only 28.7% of smartphones in the three-month period, but that was with sales being led by the expensive 5s model, which was outselling the 5c by three to one. Britain is an important barometer market for companies like Apple and Samsung. The country as of October has 68% smartphone penetration; 86% of devices sold in the past three months were smartphones. 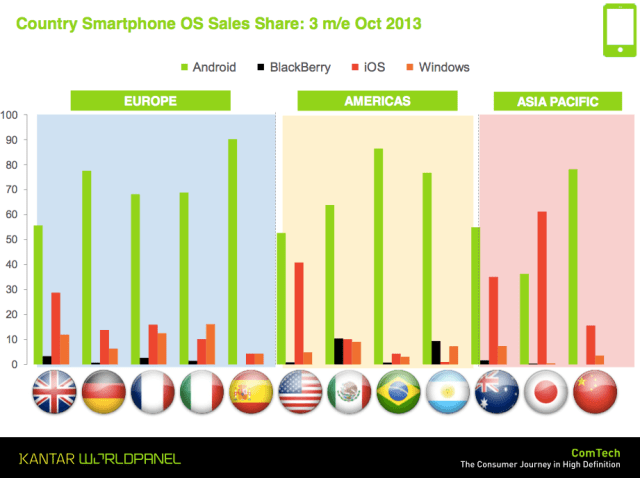 Interestingly, the 5c, despite its dear price tag, is actually finding a niche in the U.S. among what Kantar terms “lower income households.”

“The cheaper 5C appeals to a broader audience than Apple usually attracts,” Sunnebo writes. “In the US, the biggest demand for these mid-end models is coming from lower income households.  Some 42% of iPhone 5C owners earn less than $49,000 compared with just 21% for iPhone 5S.” He also points out that 5c customers are “slightly older” than 5s, with an average of 38 years versus 34 years. “The good news for Apple is that this wider appeal is attracting significant switching from competitors. Almost half of iPhone 5C owners switched from competitor brands, particularly Samsung and LG, compared with 80% of 5S owners who upgraded from a previous iPhone model.”

Still, whatever Apple is doing, for others, price remains a key lever for growing sales. Among other platforms, it’s interesting to see how Windows Phone and Nokia are going by the Android playbook to gain market share at the moment. Windows Phone is now just over 10% of sales in the top five markets in Europe, and is approaching 5% in the U.S. That “momentum,” Sunnebo writes, “remains reliant on low-end handsets.” He says that in the UK, nearly 75% of Nokia Lumia sales in the latest period were low-end devices such as the Lumia 520 and 620 – “a pattern that is similar across other EU markets.”

However, that’s not yet bearing fruit in China, where Nokia has also lavished attention on low-end Lumia models (its first in the market, in fact, came out there).

In China, where Nokia was once the biggest smartphone player, it now only has a 3.5% share. That, it seems, is now Xaomi’s game to lose. “Local Chinese brands are becoming increasingly dominant in the world’s largest smartphone market, selling high specification Android devices at low prices,” Kantar writes. “If Microsoft partnered with a major local brand it could help drive Windows Phone momentum but, with the Nokia takeover imminent, this does not look likely to happen anytime soon.”

Indeed, it will be Microsoft calling the shots from now on. It will be interesting to see if, by controlling Nokia’s destiny more directly, it will be able to turn that boat around. 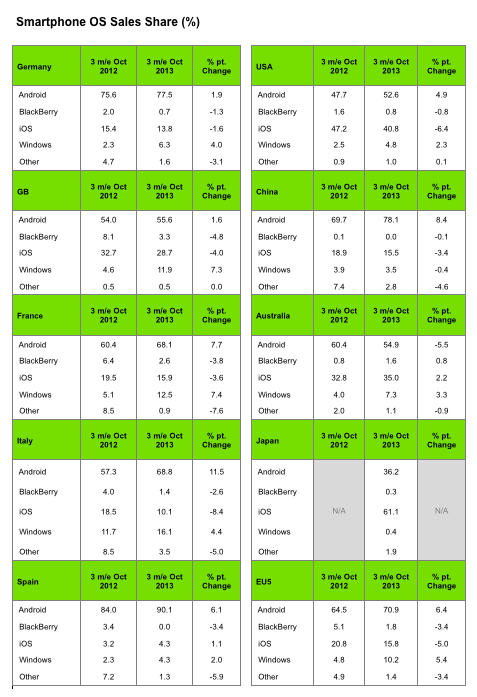