Agent is an app that aims to make your Android smartphone just a little bit smarter, using all of your phone’s sensors to detect what you’re up to and tweak your settings automatically. Driving? It’ll automatically respond to texts to let people know you’re busy, and remember where you parked your car. Sleeping? It’ll only let the most important calls through.

Agent is a spin-off, of sorts, of another Egomotion product called “Trigger” (or, as it was once known, “NFC Task Launcher”). With Trigger, Egomotion sells packs of programmable NFC tags which can fire off actions on your phone. Want your phone to silence itself and set an alarm when you go to bed? You’d stick one of their NFC tags on your nightstand, then set up a series of tasks to fire whenever that tag is detected. Want it to automatically launch your favorite music app when you get in the car? Tuck one of the tags into your cup holder. 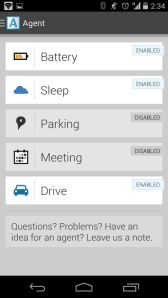 In time, however, the team realized that many of the most popular use cases didn’t really require NFC. Instead of an NFC tag on your nightstand, why not just auto-silence the phone during certain hours? Instead of hiding a tag in a cupholder, why not just detect when the user is connected to their car’s Bluetooth? Thus, Agent was born.

Agent takes the core concept of Trigger and boils it down to its essence. Gone is any mention of NFC tags, instead relying on the handset’s built-in capabilities — things like its accelerometer, clock, or WiFi/Bluetooth. Gone is the relatively complicated task setup process, with Egomotion instead providing a small set of pre-built actions that they call “Agents”.

At the moment, the app’s got five different built-in agents:

If you’re a battle-tested Android expert, Agent’s tricks might not raise an eyebrow. “Pft, I’ve got Tasker!” you say. “And I rooted my imported HTC J One and flashed it with a custom rom that does all this ages ago.”

For the less intense folks (read: most people) out there, though, Agent should hit a sweet spot. It’s simple, it does exactly what it promises to do, and the setup is very straightforward and well thought out.

My one hesitation: while I normally hate when people say “But what if company X just decides to do this”, it’s a pretty valid concern here. With all of the data that Google gobbles up and pipes into Google Now, it’s almost certain that they’re tinkering away with similar concepts right this second. 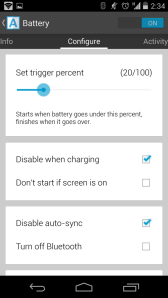 Actually, it’s not almost certain. It is certain. Google-owned Motorola has already released an app that they call Assist, which aims to do much of the same stuff that Agent does. As Egomotion co-founder Kulveer Taggar pointed out to me, Assist only works with a handful of Motorola phones, whereas Agent works on many, many Android phones. But Moto’s handsets tend to be a test bed for Google (See: the always-listening “Okay Google” voice command debuting on the Moto X months before being integrated into Android 4.4). If the concept proves popular, how long will it be before Google starts tying such functionality right into the core of Android itself?

In the mean time, though, it seems like Egomotion is on to something: according to the company’s stats, 95% of agents that get turned on, stay on.