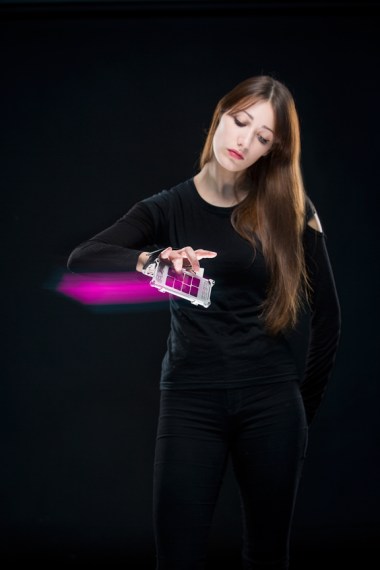 Anything that encourages people to stop hunching over their iPhones like a tech-literate Mr. Burns is a good thing–especially when it also looks cool and makes fun noises. The AUUG Motion Synth, a grip that attaches to your iPhone or iPod touch and creates sound by tracking your movements through its app, was designed for electronic musicians, but I can see other people using it, like dancers, artists or music teachers looking for an engaging way to teach kids music scales. It recently launched on Kickstarter and is scheduled to start shipping in April if it reaches its fundraising goal.

The AUUG platform, which consists of an aluminum grip with an elastic strap, app and cloud-based platform, can wirelessly control software on a PC or non-wireless music hardware with a MIDI cable. It was developed at product engineering studio SGW Designworks by a team led by neuroscientist Joshua Young, who wanted to release electronic musicians from their laptops and give them a more expressive way of creating sounds and connecting with audiences.

The AUUG app doesn’t product its own sounds, but instead gives users a wide array of options by converting motion data from their iPhones or iPod Touches into signals that are then transferred to other sound apps or external devices. Its performance screen has 8 buttons that line-up with the AUUG grip’s overlay and let musicians play diatonic scales like C Major. Once the AUUG launches, users will be able to connect at www.auug.com to share app presets or setup ideas in an online forum.

More information and to see samples made by electronic musicians with AUUG, check out its Kickstarter page or Web site.