Mobile shopping service Sift has closed on $2 million in seed funding, the company is announcing today, alongside its launch on iPhone. The startup first emerged almost exactly a year ago as a way to leverage shopping data found in users’ inboxes, including daily deals emails, retailer promotions, and messages from flash sale sites, then turn those into a “shoppable” experience on the iPad. Since then, the company has expanded beyond email data, to allow users to shop products from roughly 3,000 retailers, too. And today, Sift is expanding again. In the new mobile app, Sift is introducing a social shopping feature called Shopping Circles.

The funding round of $2 million is a total raise to date, which includes an additional $1.5 million closed last week, led by DN Capital. This new funding also sees participation from previous investors Tandem Capital, Unity Ventures, Sand Hill Angels from its $540,000 angel round, and new investors Social Internet Fund, Future Perfect Ventures, Grey Corp, the CEO of NQ Mobile, Omar Khan, and others. 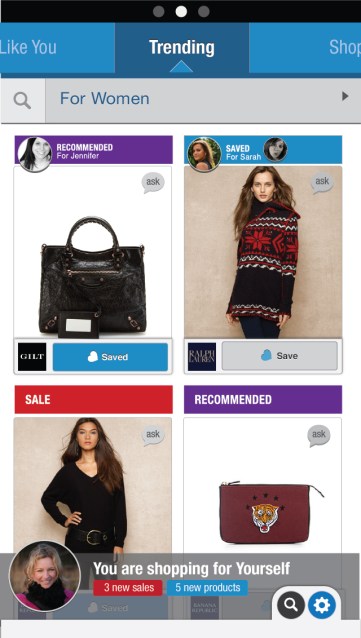 Saurin Shah, Sift co-founder and CEO, says he had the idea for the service from watching the way the women in his family shopped and used their iPads. Browsing was a form of entertainment for them, he found, observing how they would migrate from social apps like Facebook and Pinterest to retailer websites and elsewhere. But unlike on the desktop, shopping on iPad was not then an ideal experience, which is why they first began to work on Sift.

Today, Sift is hitting the demographic Shah had targeted – around 65% of users are women, ages 25 to 45. The users may or may not be married, but what they have in common is disposable income and a good-sized list of favorite brands. On average, Sift’s users shop between 30 to 50 stores. “It was really eye-opening…we didn’t expect that,” says Shah. “That’s a pretty surprising number.”

Now Sift, whose name derives from the fact that it “sifts” through user emails, has shoppers looking at five times more promotions and sales than they do in their email inboxes, claims Shah. That’s 70 to 100 promos per week, he says. He declined to talk about the number of users on Sift, or conversions, however saying it’s still early days for the product.

With the iPhone release out today (the iPad update is still a couple of months out), the company is introducing a social layer with Shopping Circles.

Here, users can add close family and friends, children, and others to the app, and receive instant recommendations about what those users might like. If their friends are also Sift users, those recommendations come from Sift’s understanding of a user’s taste, based on its analysis of their shopping patterns. But if they’re not users, it will instead make suggestions based on what other people are buying for people like them, more broadly speaking. 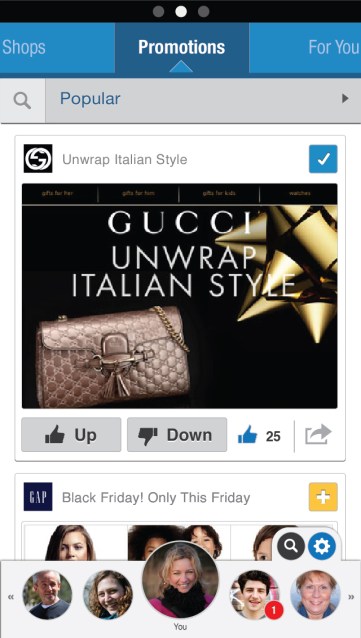 “In our early testing, this has been doing phenomenally well,” says Shah, of the new feature. “And with the holiday shopping season upon us, it just made a lot of sense,” he adds. In the future, an option to import wish list data from Amazon could also arrive, to improve the shopping suggestions. But more immediately, a feature which will let you browse through your purchase data to see suggestions of other items you might like based on what people who bought those items have also purchased, will arrive after the holidays.

Longer-term, the plan for Sift, which competes with PeeqPeeq and others, is to help retailers and other consumer and media companies connect with users based on their demographics and shopping behaviors. The company is already talking to some of these businesses now, but has nothing to announce on that front at this time.

The new version of Sift – now for iPhone, too – is here.