Microsoft has started to sell t-shirts, hats, mugs, and sweatshirts that bear slogans from its Scroogled campaign that needles Google as bad on privacy. I confirmed with the company that the clothing line was released today.

It’s more than cheeky. Here’s one of the offered shirts, bearing a statement that you can also get on a mug if you so desire: 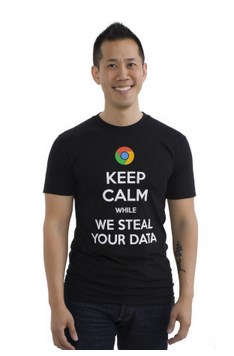 Yes, that’s the Chrome logo sitting on top of text that says that you should really kick back as your data is stolen. Oh my. Google is not going to be happy with this, I presume. 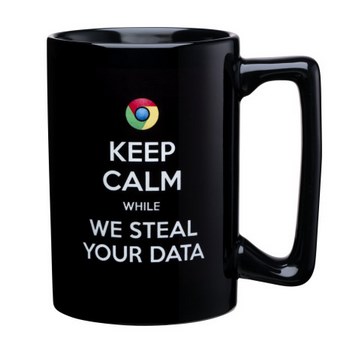 Scroogled, as you certainly know, is a campaign by Microsoft to paint Google in a negative light when it comes to things like Gmail’s automatic scanning of incoming email to target advertisements. Google maintains that it doesn’t do so for sensitive categories such as bankruptcy. Microsoft also scans incoming email, but only to weed out malware and the like. This has always felt like a small distinction to me.

A recent Google response to Microsoft’s claims went as follows:

“Ad targeting in Gmail is fully automated, and no humans read your email or Google Account information in order to show you advertisements or related information. […] We also don’t deliver ads based on sensitive information, such as race, religion, sexual orientation, health, or sensitive financial categories.”

Still, Microsoft is pushing on with the campaign with apparent gusto. You don’t release a clothing line like this if you don’t want to make a little noise. The above shirt will knock you back $12, if you were curious.

Google has had a few recent scraps with the law on the privacy front, including a recent $17 million fine that it paid over its changing Safari settings. The fine was token, given its size when compared to Google’s wealth as a company.

Microsoft and Google have had a rough year, fighting over email, YouTube, and more. Given their huge competitive surface area — from selling music, to search, to mobile operating systems, and so forth — that’s not surprising. Still, Microsoft appears more willing to sling mud.