Yesterday, we wrote about a new Facebook feature that was getting spotted by a few users showing them when their online friends were on web or mobile versions of Facebook. We were told by Facebook that it was a test. Now, Facebook says it is getting rolled out globally. 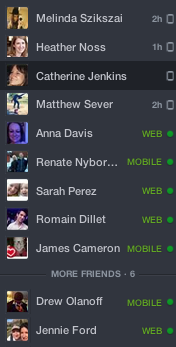 As we mentioned yesterday, we think that Facebook is working on enhancing its messaging services as a way to keep the service evolving, and catching the attention of those who may not be using it as much as they could be to communicate.

Knowing whether users are on mobile or desktop versions is also useful: it can help shape what kind of message you send, and what kind of message you expect to get in reply. It’s not Snapchat, and it’s actually a bit retro when you think about how this is the kind of info that seems a throwback to the days before smartphone supremacy, but as we said yesterday, it’s a sign of how Facebook is looking to continue evolving and “keep shipping”. (Maybe especially important if you believe that it is losing some of its cachet as the leader in social communications.)

And, as some readers pointed out yesterday, it also brings Facebook more in line with another competitor, Hangouts from Google.

This is also about Facebook shifting around where it gives you information: it already provides some of this detail but in a different way: today if a user is sending a message from a mobile device, the recipient can see that detail on the message itself. Add “mobile” or “desktop” into the status window preempts that.