Twitter Alerts — a service that Twitter launched in September for emergency, relief and charity organizations from the U.S., Japan and Korea to send out critical messages to opted-in users — is getting more international. Today, the newly public company is turning on Twitter Alerts in the UK and Ireland.

Some 57 Twitter accounts across the two countries have signed on so far, mostly in the UK. They include all 47 UK police forces, An Garda Síochána in Ireland, the London Fire Brigade, the Mayor of London’s office, the Foreign Office, and the Environment Agency — who will now send alerts on their latest critical news, with the information appearing as highlighted tweets, SMS notifications, and push notifications if you use Twitter’s iOS or Android apps.

For all of these, users have to opt-in, and the idea here is that the organizations doing the alerting will be limiting their messages to important ones. “While participating organisations choose what information merits a Twitter Alerts designation, this feature is intended for crisis, disaster and emergency communications,” Twitter notes.

“Getting fast and accurate information to the public in a major incident or terrorist attack really could make a life-saving difference,” noted Commander David Martin, who oversees emergency planning for the Metropolitan Police Service, in a statement. “Using social networking sites, including Twitter, gives us additional ways to talk directly to the public. Twitter Alerts means that our messages will stand out when it most matters.”

For now it seems like the only way to sign up for alerts for particular organizations is to visit Twitter’s Alerts pages to browse and add accounts — there are no “alert” buttons on the accounts themselves.

As we pointed out in September, Twitter Alerts was borne out of “Lifeline,” a service that Twitter created to help with the relief effort after the 2012 earthquake and tsunami in Japan. For a platform that has been building up its credibility as the go-to place for people to get real-time information about what’s on TV, Twitter Alerts is a way to show that you can use the same framework for potentially more urgent purposes.

Same means, different ends, and in the end, all controlled by Twitter — which cannot be said for some of the other “alerts” services that have run over Twitter in the UK in the past. Last year, for example, around the London 2012 Olympics ticket sell-out furore, several accounts popped up offering users alerts for when tickets would get released for different, previously sold-out events, but Twitter took many of them down.

Since last year, Twitter has been trying out a lot of different features as part of a philosophy of innovate through experimentation, from new features in its Timeline to new looks on its apps. Some of these go on to become full features, and some fall by the wayside. The fact that Twitter Alerts is now expanding beyond its original footprint, and playing to Twitter’s intent to continue to grow internationally, is a sign that it might be one of those that is here to stay. 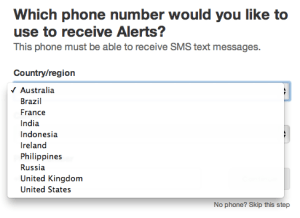 Although a spokesperson declined to comment to me about where Twitter Alerts might go next, I noticed that when you signed up for Alerts to come to your phone, you were given a specific lists of countries from which you could register your phone. This could be a list of where Twitter may be looking to launch this service next.

Alerts complements some of the other products Twitter has launched in recent months that use notifications to flag information to its users — a way to help shape the service and promote people to interact more on the platform. EventParrot and MagicRecs use direct messages sent to those who follow the accounts with details respectively of big events, and users and tweets seeing surges of momentum. Twitter labels both accounts “experiments” for now.

While both MagicRecs and EventParrot are personalized to your own profile as it exists on Twitter (it essentially alerts you to what’s going on in your own defined Twitter sphere of influence), Alerts is positioned a bit differently. The service is more like a dedicated one-to-many broadcast channel for those who have opted in to receive it, providing the organizations with a way to highlight certain public tweets for those who want to see them. Given that many people follow hundreds or thousands of accounts, and unless you are a power user who combs the site for all the latest news, there are changes that you will miss things; this is one way of you making sure you do not.

For now, Alerts are free both for consumers and NGOs and emergency organizations to activate and use — a reminder of how Twitter has positioned itself as the town square for the connected world. But as Twitter builds these out, and measures what kind of response people have to the different features, I wouldn’t be surprised to see the same basic concept applied to paid and sponsored pushed alerts, too.