Here’s another twist on messaging aiming to make digital comms more fun. Toymail is a Wi-Fi connected toy that lets parents talk remotely to their kids via a smartphone app — with their message spoken in the toy’s tone of voice. Why can’t they just give their kids a cheap phone and call them up? Of course they can, but a phone probably isn’t going to be as cute looking or fun sounding as Toymail’s ‘Mailmen’ toys.

The idea is to inject a little cartoon fun into parent/child digital interactions, and give kids a chance to play with physical toys rather than being sucked into screens and phones so early. (While letting parents carry on their love affair with their smartphones.) There’s a choice of five different Mailmen characters, which have been designed to look like a cross between a mailbox and an animal.

Toymail is not the first cutesy connected object that can remotely convey messages. The now defunct Nabaztag rabbit springs to mind. Toymail’s Mailmen also have some spiritual overlap with The Little Printer — although where that gizmo churns out tiny little rolls of paper inked with messages, the Mailmen’s missives are pure audio. 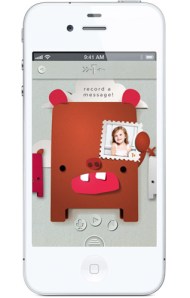 Toymail does allow for conversations not just one-way broadcasts, though, since kids can hit a button on the back of their Mailman to reply to the last message received — with the kids’ reply delivered for playback in the app. Only people who have been approved via the app are able to connect to the Mailman, so random strangers aren’t going to be able to send messages.

And if you’ve run out of things to say yourself, there’s a Daily Toymailer service you can sign up for that will send a daily message to the toy, greeting your child by name and singing a song or sharing a factoid or quote.

One half of the Toymail’s creator team, entrepreneur and MIT alumna Gauri Nanda, came up with the cute yet fiendish Clocky: an alarm clock with wheels so it could scoot out of your reach and force you to crawl out of bed to shut it off.

Toymail has taken to Kickstarter to try to raise $60,000 to get Toymail to market. At the time of writing, it’s approaching $10k raised, with 17 days left on the campaign.

And while each Mailman costs $50 to Kickstarter backers, and the iOS app is free (an Android app is planned), there is an ongoing cost associated with use of Toymail. Parents will need to buy virtual books of stamps to send messages to the toys. Each stamp is good for one message, and a book of 50 stamps costs $0.99 — or unlimited stamps are $2.99 per month.