While the proliferation of baby photos may be unwelcome across wider social networks like Facebook, there’s a growing interest in closed, more personal social networks built for private sharing on mobile. London-based 23snaps is one of them. This company’s cross-platform mobile application is designed specifically for families, and has now bootstrapped its way to half a million users as of last week.

That includes both the content creators, like mom and dad, as well as recipients who engage by liking and commenting on photos.

There’s nothing radical about 23snaps’s overall concept – it’s essentially a simplified version of Facebook, made just for private sharing. But its growth over the past year-and-half since launch (then only on iOS), shows that there’s a little room for alternative networks to scratch out a small space for themselves under Facebook’s giant shadow.

This has proved more than true with a plethora of mobile messaging apps, which cite millions, tens of millions, and sometimes even hundreds of millions of users. Family-focused social networking apps, however, tend to have smaller footprints. Y Combinator-backed Origami, recently snapped up by eFamily, had only 40,000 users at the time of its acquisition, for example, including users it had acquired through buying out a competitor.

According to 23snaps co-founder Ivailo Jordanov, around 60% of its users are active on a weekly basis, and the company is now ramping up on their print products offering. (It introduced printed photo books this spring.) “We are still iterating on the exact offering and tweaking the product, so it is really early days,” says Jordanov. “But I can share that on the basis of the current rate, the extrapolated annual revenue is around $80,000,” he tells us, adding also that the figures are expected to increase over the holidays. Average order values are now clocking in around $32.74, he notes. 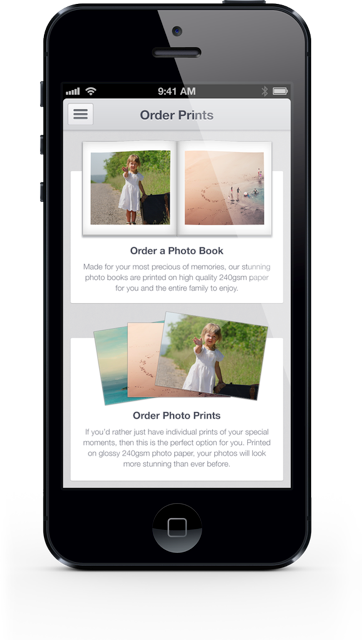 In terms of printed products, the company offers photo prints (4″x4″ and 4″x6″ prints) and hardcover photo books (matte cover, 8″x8″), the former which are only available in the U.S. and U.K., while the books can ship worldwide. 23snaps also recently introduced a digital photo frame ($189), which is a more unusual, but clever idea. The hardware integrates with a 23snaps account and connects over Wi-Fi to display your photo feed. Going forward, the plan is to introduce more photo and potentially video products, Jordanov says.

He believes that being a cross-platform company has played a critical role in getting the company to this point. “When it comes to small social networks, particularly for families, the entire value proposition is negated when a single member of your family can’t participate,” Jordanov explains. “That’s why in addition to iOS, Android, Windows 8 and Web, we’ve enabled less tech-savvy family members to subscribe directly via email only and even integrated with a digital photo frame so that family members can enjoy the photo content even without a computer,” he says.