IDC published its third-quarter 2013 smartphone market share and sales estimates today. Winners this quarter are Windows Phone and Android. Apple was mixed, while BlackBerry managed to implode at a clip so incredible, it reminds me of what happened to Longhorn’s dreams.

In the third quarter, Android saw its market share surpass the 80 percent mark (global), and its total volume grow to 211.6 million devices. Windows Phone grew year over year from 2 percent to 3.6 percent market share, shipping 9.5 million devices in the quarter. That device volume is a 156 percent improvement on the year-ago quarter.

Microsoft is likely content with that figure, but it remains small compared to its two remaining rivals.

Apple grew its device volume, from 26.9 million in the year-ago quarter to 33.8 million (third quarter). However, the larger smartphone market grew 39.9 percent in the intervening year, dropping Apple’s global smartphone market share to 12.9 percent from 14.4 percent a year ago.

BlackBerry lost even more blood, something that astounds me: It’s still alive? The company lost 41.6 percent of its device volume year-over-year. It shipped a mere 4.5 million devices in the quarter, under half of its former rival Windows Phone’s volume. 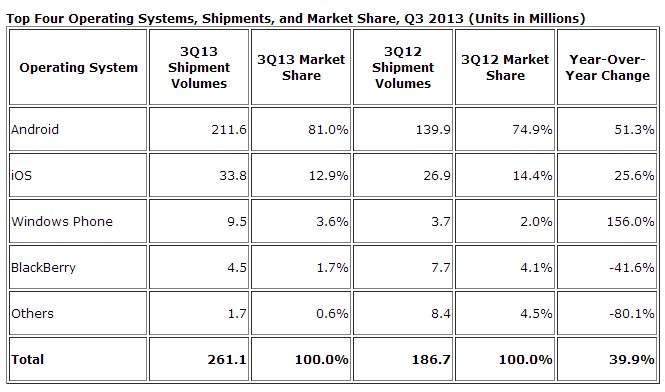 So, BlackBerry is all but kaput. This means that Microsoft has cleared the path for it being the “third platform.” However, as we recently saw, Microsoft’s developer numbers remain on the weak side.

Finally, according to IDC, the average selling price (ASP) of smartphones fell 12.5 percent in the quarter, to $317. This could mean that Android and Windows Phone have space to continue absorbing more market share, as the smartphone market itself expands, because they offer cheaper handsets than Apple.

For now, things appear somewhat set: Android rules the smartphone market, Apple makes all the money, and Windows Phone is scrapping to prove that it deserves the third-place spot that it has scratched out in the game.