Google is releasing yet another update to Gmail today, which sees deeper Google Drive integration coming to the company’s email platform. Now users will be able to skip the whole process involved with downloading email attachments, and instead view and save their files directly to Google Drive – without leaving their inbox.

As the feature rolls out, Gmail users will begin to see new thumbnail previews for files at the bottom of their email messages, including both photos and videos, as well as office documents, PDFs, and spreadsheets. Clicking on one of the file previews will then display the item in a full-screen image format. From here, you can basically interact with the file itself right from your Gmail inbox, with no need to first download then launch the file using desktop software.

However, if you do need to save the item for later viewing, you just click on the Google Drive button that appears when you hover over the preview. From the window that appears, you can click to save the file to your Drive, even choosing the folder where the item should be stored. If you still need to go the old-school “download” route, don’t fear – an arrow button will allow you to continue to do things in the traditional way. 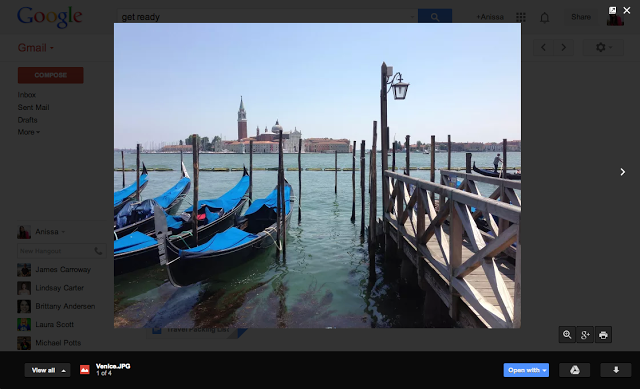 This move not only supports interactivity between Google’s various online services, which could push more users to adopt Drive over competing services like Dropbox or Box, for example, but it also helps with Google’s larger “cloud” agenda. With Chrome OS, the company’s web browser-based operating system, Google forgoes the idea of “desktop software” altogether. 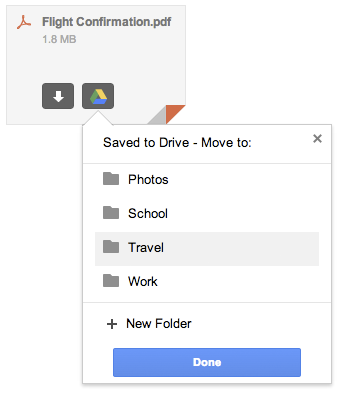 It’s also another effort to make the online software feel more like mobile, and vice versa. When you’re viewing email attachments on mobile, there are already fewer steps involved.

It’s worth also pointing out that the addition comes shortly after an email startup for salespeople, Yesware, bought a San Francisco-based company called Attachments.me, which was also working to better connect email attachments with the cloud. Even if the latter company had not hit a roadblock in its path to growth, this new feature in Gmail could have presented a serious challenge for such a service to overcome.

Google says the update is available initially to desktop Gmail users, and will be rolling out over the next the week. The company notes it now has 120 million active users for Google Drive – a number Google had not yet released until now. This puts the service close to – and maybe above – others also operating in the same space.  Dropbox has 175 million registered (not active) user accounts, Apple’s iCloud has 325 million, SkyDrive has over 250 million, and Box trails with over 20 million accounts.

In addition to support for standard attachments, the Google Drive SDK will also now allow third-party developers to better integrate their apps with Google Drive, and let users interact with apps and files in Gmail.

Gmail users will be able to choose which app to open their file attachments with from the new file preview feature in Gmail, which will show both suggested and connected apps. And if users don’t see the app they want, a “connect more apps” option will let them pick a new, compatible app – again, right from the inbox. 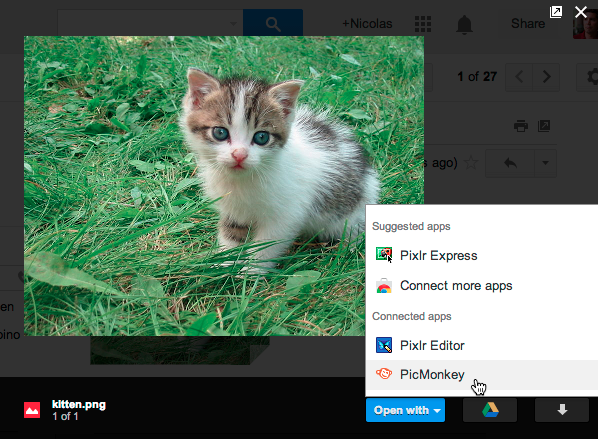 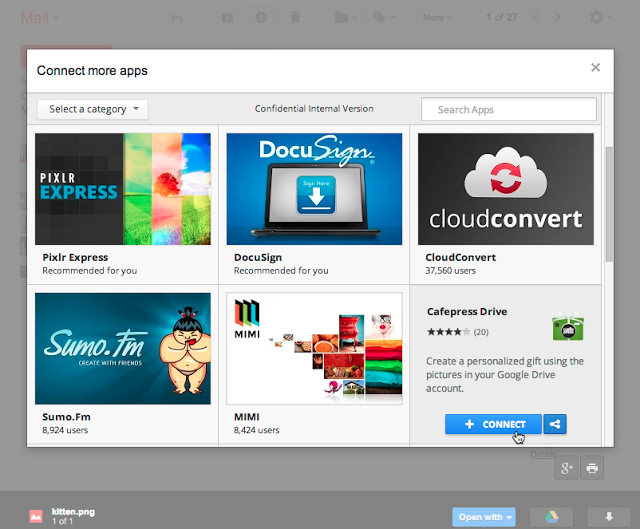 More details on this feature are here on the Google Developers blog.