L.A.-based startup At the Pool is relaunching its social network as a new mobile app today, pivoting away from its earlier focus on matching up users based on common interests to first and foremost connecting people with nearby friends. In addition, the company is also moving to become a mobile-only product, and ditching its web version, while also eliminating the requirement that users first authenticate with Facebook.

When the company debuted its product in mid-2012, CEO Alex Capecelatro described it at the time  as “sort of a mashup between Meetup and Match.com.” The site had users join “pools” (groups) to help them meet new people who shared a common interest, or who wanted to join in a new activity of some sort, like biking or hiking or yoga, for example. The network was not just about dating, but also meant to help people make new friends or meet professional connects, too.

As it turns out, users still wanted to connect with their real friends.

“The website’s function was to introduce you to new members who share your interests. While that proved valuable and interesting, we kept hearing feedback that people already had too many friends they never got to see,” explains At the Pool’s biz dev head David Zimmerman. “We experimented with ‘introducing’ members to people they were already connected to, and the results were staggering,” he says.

“People wrote in saying ‘I had no idea Kevin also lived in Chicago,’ or ‘wow, I hadn’t caught up with Sarah since college, so glad we re-connected,'” adds Zimmerman. So with the new version of the social network, the company re-tooled to place a greater emphasis on existing relationships. 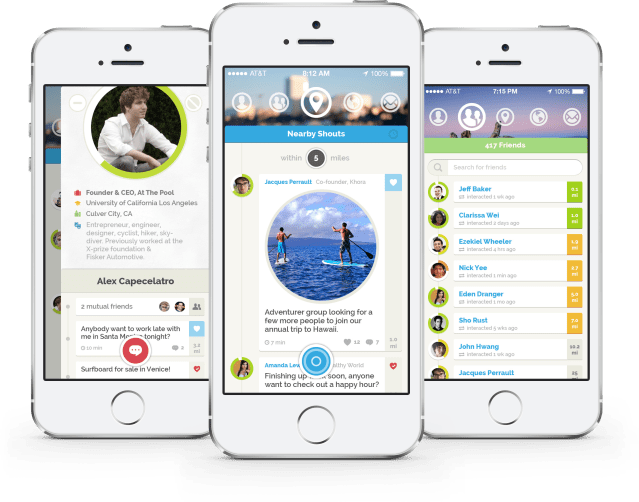 The shift from web to mobile also represented where the company believes social networking is heading – away from desktop computers, and on to smartphones where users can interact in real-time.

The company says the earlier product arranged over 3 million introductions in over 100 countries, though it declined to share user numbers or actives. In addition, 85% of At the Pool’s members were under the age of 35, and the demographics were fairly well split between male and female. Today, At the Pool is going after that audience even more, targeting its new mobile app toward millennials who want to use mobile as a way to connect with people offline, for things like grabbing a lunch, an activity, or to meet up with other friends they already know while traveling.

This is similar to  feature Facebook itself toyed with in the past by introducing a “Find Friends Nearby” option on mobile which was later pulled. There was also a brief surge of interest in so-called “ambient social networks,” like Banjo, Highlight, Glancee (which Facebook acquired), Sonar (deadpooled), and others – an interest, it seems, At the Pool is now trying to revive.

Its angle? The company is offering an “open social network,” where though it’s matching you with the best nearby people using its algorithms – so you’d know if a friend was nearby, that is – the main qualifier with the new At the Pool app is distance. That means you can also publicly shout out to the people around you, which will automatically alert friends in the area as well as other new people who might be interested in whatever it is you’re suggesting (e.g. anyone up for basketball game?, meet at the dog park?, etc.).

So at its roots, At the Pool can still help connect new people the way it once did.

Of course, networks like this, and those that have failed before At the Pool, still work best when surrounded by a lot of people in close proximity, actively using their smartphones. So, college campuses, concerts and other large networking events are where things like At the Pool make the most sense.

The app itself is well designed, if a maybe a bit too busy and colorful. It’s a lot to take in as a new user, with its bouncy icons and five different sections where menus and screens appear both below in a messaging or news feed-like interface as well as popping out as a sidebar menu. But it’s not exceedingly difficult to understand, maybe just a little exuberant.

But if and when At the Pool grows, it could become annoying as random people can still connect with you and message you wherever you are. This is a problem the company admits could become an issue later on, in fact.

“We’re actually more concerned about being over saturated and having to filter down the noise, which we’ll deal with when it happens,” says Zimmerman.

The app is also lacking an ability to “hide” yourself for a time when you’re either busy or don’t want to be found, which could be a privacy or security concern.

The company, a four-person team based in L.A., raised $750,000 in seed funding last year to give it around two years’ worth of runway.

The new At the Pool app is available now in the iTunes App Store.