Airports are perennially filled with exhausted people trying to figure out where they need to go to get to the gate/toilet/perfume counter (ok, maybe not the last one). So enter stage left Google Street View. Google has stitched together more than 2,000 images taken inside the U.K.’s second busiest airport, Gatwick — which has some 34 million passengers tramping through it each year — so now you can take a virtual tour of its shiny halls.

Google is continually building out the reach of Street View by taking it to more exotic locations — indoor and out, including a gaggle of zoos and the continent of Antarctica, to name two. The Gatwick addition to the Street View roster is apparently the largest implementation of Google Indoor Maps and Indoor Street View in Europe to-date. (Street View has made it to an airport in Japan and one in Australia, but nothing on this scale before.)

The Gatwick indoor mapping project looks to have been (at least) part-funded by the airport, which said it worked closely with Google to make the maps as detailed as possible. (Update: Gatwick apparently only provided staff time to the project, not any actual cash.)

Gatwick Street View is available for all public areas in Gatwick, across both the North and South Terminals. So now you can wander around the check-in desks, hang out by the luggage carousels, or nose around the shops — without worrying whether your flight is about to depart.

Truly we are living in the future. 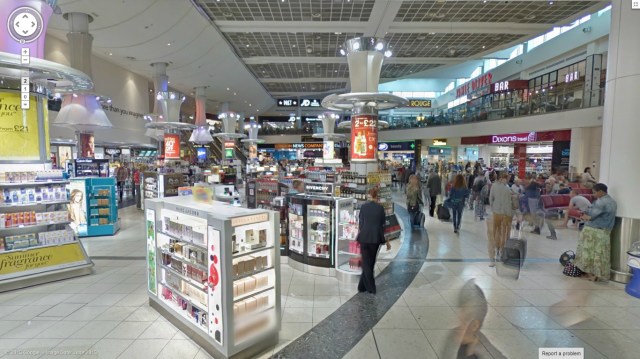