Spotify may be the world’s biggest music streaming company, but rival Deezer is inching closer to its terrain: today the company revealed that it now has 5 million paying users globally and 30 million tracks on its platform; and taking a page from Spotify’s playbook, it also took the covers off two new discovery features to improve engagement on the platform. Going one step past Spotify, Deezer is also now previewing a new Mac app that will integrate the service with your offline music collection, starting first with what you keep in iTunes.

Deezer claims that its 30 million track figure makes it currently the world’s biggest music streaming provider. And to put the 5 million paying subscribers in context, this is more than double the 2 million that Deezer reported in October 2012, when it announced a monster round of $130 million in funding that the Paris-based streaming company raised to push into international markets.

“Doubling the number of paid subscribers in 12 months sends a hugely encouraging signal that music streaming’s time is now,” says Axel Dauchez, Deezer’s CEO, in a statement. “One year ago we pledged to launch Deezer worldwide because we felt music deserved to be truly global. One year on, we are proud to say that we have over-delivered on our promises, with more than 5 million subscribers across more than 180 countries and a team of expert editors around the world sharing their love and passion for music. But we’re not content to simply keep up with the world; we want to lead the charge.”

Still, that 5 million is also almost certainly some way shy of what Spotify is pulling in with paid users right now. The last numbers we have for Deezer’s Swedish rival are from March 2013, when it had 6 million — a figure that is almost certainly higher eight months on. Spotify is reportedly in the process of raising money at a $5.3 billion valuation, although the company is not commenting on this right now.

Deezer typically charges the equivalent of about €9.99 per month for streaming, although it often discounts that to promote the service — for example right now in the UK users can take up the service for an introductory price of £4.99 per month. Dauchez told me today that the company is currently not profitable, but that is because it is in growth mode. Before raising the $130 million round, the company was profitable, he reminded me.

Today’s rush of news features getting announced today are signs that the company is once again pushing ahead with features that it hopes will not only get more people using its platform, but using it more regularly and in more scenarios.

I’m at a press event that Deezer’s holding in London to take us through these new services, and I’ve now interviewed Dauchez and will be updating this with his comments. Here are the details about the new features: 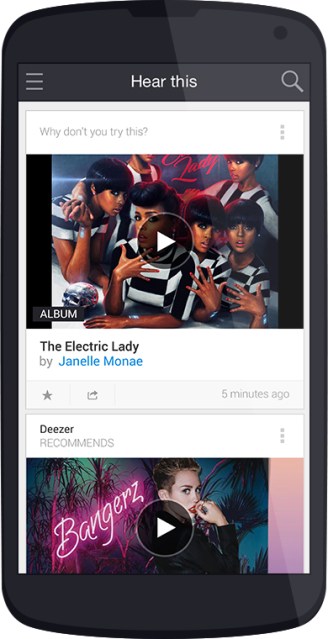 Hear This. Think of this as Deezer’s equivalent of Spotify’s Discover feature, a way of helping users find tracks when they are on the go. Although Deezer is also available for desktop users, today some 75% of its base are accessing the service on mobile, so it makes sense for the company to figure out better ways of letting those with smaller touchscreens find new music. Hear This includes daily recommendations based on what you listen to, as well as a list of the latest releases from acts that you have favorited. There is also a social element, with the ability to access friends’ playlists and those curated by Deezer’s “music experts” (In this last area, you can see the influence not just of Spotify here, but of Songza as well.) Deezer says it has some 100 million playlists in all on its platform today.

Explore. Following in the vein of Hear This, Explore is a new kind of search algorithm that lets users find music by region as well as genre.

New Deezer Mac app. This is not actually getting launched today; rather Deezer is previewing it, and it’s a great sign of how the company is trying not just to copy what its rivals are doing but also go one step past them.

The main feature that stands out for me with the Mac app — apart from the fact that it exists at all, considering that Deezer positioned itself as web-first at a time when Spotify adhered initially to local clients — is that its idea is to become your single music dashboard. Not only does it give you access to Deezer’s catalog and your own playlists and those of others, you can also integrate your iTunes collection so that you have a full spectrum of music that you might want to hear.

The next 5 million: targeting late adopters with a new pricing tier in 2014

It’s not clear whether other music libraries will also get incorporated, and whether Deezer ultimately will try to leverage this to replace iTunes for its users, but in any case it is a smart move for the company. The web app, of course, would only work for users who are online, so this gives the company a connection to those on desktop who may not be for whatever reason. And of course it helps the company better address the vast majority of consumers who have yet to stream music as part of their listening experience.

This is an area where Deezer is likely to do to a lot more in the future. In an interview with TechCrunch at the event, Dauchez tells me that Deezer is now working on ways it can tackle the long tail of consumers who are not the early-adopter, avid music users. He says that Deezer is developing a paid — not free — service that it will launch next year that will sit alongside its existing subscription service, but aimed at less frequent music consumers.

“Right now, we are the best service for people who are in ‘music collection mode,'” he told me. “But this is not all people. If you were a guy who used to, before 2000, buy two CDs per year you are not in ‘collection mode.’ You won’t contemplate a streaming service. We will adapt the service for these other users.”

Alongside this, Deezer is also looking at ways of targeting segments of the market who may not be those who listen to the pop music that forms the majority of what is streamed and consumed today. Last month Deezer launched a new classical music discovery service along with a partnership with Deutsche Gramophone — the idea is that it can search not just by artist or genre, but instrument, as well as “contributors,” who might be composers or musicians or conductors, and so on.

Dauchez says that right now Deezer’s two biggest demographics are 20-25 year-old male, tech friendly types; and 35+ male music lovers. In that context, if you target a classical music lover with Deezer or any other streaming service that you can hear on a phone, “It’s as weird as saying you can hear it on a pack of cigarettes,” he says, holding up his own pack of Marlborough Lights. “It’s not relevant and it doesn’t make sense.”

Along with the product news and catalog/user milestones, Deezer also announced a total of 25 carrier partnerships bundling Deezer music subscriptions with mobile services, with the 11 newest announced today. Deezer was something of a trailblazer in aligning music streaming with mobile usage — with an early deal and investment from France Telecom as part of its first efforts to grow. It’s something that Deezer credits with its wide usage in France and is also a trick that Spotify has used to replicate that success.

Interestingly, it seems like Deezer is finally starting to outgrow that early iteration of its service: Dauchez today told me that the company has finally tipped the balance between having more users internationally than it does in its home market.

The company is also announcing a few key hires, including Christopher Coonen as COO. Coonen founded PayPal in France and then Europe, and will be focused on helping Deezer pick up more subscribers and meeting revenue targets. And it appears to have poached Gerrit Schumann, co-founder of German rival streaming service Simfy, as its VP of Europe. He will be based in Berlin. 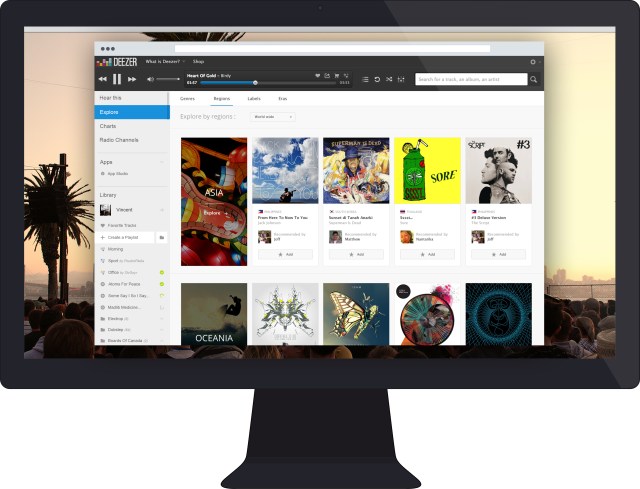