It’s been a tough year for Viddy. After seeing huge growth on the back of Facebook Open Graph, it raised a ton of money at a huge valuation — only to reverse course over the following months when the social traffic it was receiving started to sputter out. What followed was a series of executive departures, layoffs, and a recapitalization as the company tried to re-focus on doing what it did best: building products.

But the remaining team hopes that what didn’t kill it will ultimately make it stronger. The company, which has been newly re-branded Supernova, will continue to support the Viddy app. But it also has a lot more in store, including a pair of new apps it hopes will tap into the photo- and video-sharing zeitgeist.

The Birth Of Supernova

Supernova is made up of the core engineering team that had been behind Viddy — about a dozen in all. It’s led by technical co-founder and new CEO JJ Aguhob along with chairman Jason Rapp, and is using the infrastructure it built to support the Viddy video-sharing app in order to explore other types of social media sharing.

Aguhob says the name was chosen as an analogy for all that Viddy has been through. A supernova is a bright star in the universe that collapses on itself but gives rise to new stars. That’s an apt description for what’s taken place at the company, and how it sees itself going forward.

While it’s seen its share of turmoil, not everything has been bad. Due to a number of tweaks to the Viddy app, it has actually seen a fair amount of growth over the last few months. Despite the rise of competitive apps like Vine and the introduction of Instagram video, Aguhob says that Viddy has actually been able to retain most of its creative community — which includes professional content creators as well as brands — who continue to make interesting videos for its community.

A new onboarding process, as well as the ability to upload multiple videos from the camera roll and assemble them as some sort of vignette, has Viddy seeing higher engagement and retention rates over the last few months. September monthly active users were higher than in August, and October’s were about three times larger than they were six months earlier.

New Products For A New Generation Of Users 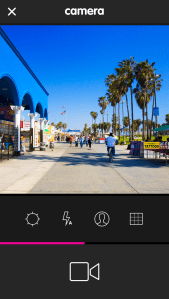 While Viddy will remain a part of Supernova’s focus, the company is looking to spawn other interesting applications, building on the highly scalable infrastructure they’ve already built out, as well as their technical expertise. Given the team’s background in social media sharing, it’s probably not a huge surprise that the first two new products will share a lot of the same elements. One is a slow motion video-sharing app called Epic, and the other is a group ephemeral messaging app called Clique.

The first of the two apps, Epic, is probably closer in scope to what the company has already built in Viddy — and indeed, there’s some question of whether slow-motion video capture is an app unto itself, or if it should be a feature on the company’s existing app. Either way, Supernova decided to break it out, in part because of the interest in slow-motion video being driven by updates in iOS 7.

With Epic, even users who don’t have the latest iPhone or operating system will be able to record and share moments that are slowed down and hopefully made more epic in doing so. The app supports any iOS device newer than the iPhone 4 on iOS 6 or above, letting everyone participate in slow-motion capture.

“Our mission has always been to extract really great content out of people,” Aguhob told me.

While it’s a standalone app, the company is hoping to create interest by drawing on the same types of social sharing and network effects that it leveraged with Viddy. Users will be able to share to Facebook and Twitter, of course, as well as in their feeds on Viddy. 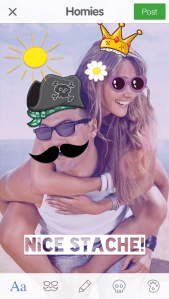 The other app, called Clique, is a little different. It is designed to appeal to a whole new group of users who have signed on to the craze of ephemeral or anonymous messages — what we like to call the “Rise of the Ephmeralnet.”

Clique allows users to participate in image-based messaging with their friends. Going a step beyond Snapchat, which primarily focuses on one-to-one or one-to-many messaging, the new app from Supernova enables collaborative messaging, with users able to share images with one another. Others in the group can then build on those messages by adding stickers, scribbles, or text to them.

Interestingly enough, the whole thing is anonymous. So you might know all the members of the group, but you won’t know who’s posted which message. This leads to some guessing about who posted what, and you know, hilarity usually ensues.

Clique was created after a good deal of user testing and feedback, as the company tried to decide how it could go after a new opportunity for messaging among young people — teenagers and those in college.

“They hate Facebook, because it’s too public. They like Snapchat, but it’s too restrictive. They’re all on Instagram, but all their accounts are locked,” Aguhob said. Clique is therefore meant to provide all the benefits of anonymous messaging, while also allowing users to communicate with their network in a new way.

For Supernova, a company that was built on the idea of providing a new way of communicating with users, that’s nothing new. Even if its particular take on anonymous messaging might be.