Sold launched early this year with a plan to help remove some of the frustration from selling online. Debuting on the iPhone before moving to Android in September, Sold aimed to help busy people avoid the hassle of eBay and Craigslist and simplify e-commerce by taking the whole process out of their hands.

Today, just seven months removed from launch, the Sold team announced via its website that it has been acquired by Dropbox and will be closing its service as a result. Backed by $1.2 million from investors like Google Ventures, Greylock Partners, Matrix Partners and the team at Boston Seed, it’s a somewhat abrupt exit for a startup that appeared to be on the way up. In September, the team told TechCrunch that it had listed more than 2,000 unique products in its marketplace and was seeing 50 percent growth, month-over-month.

In turn, beyond the fact that Sold sought to add value by reducing the work inherent to selling online by pricing items, finding a buyer and arranging packaging, shipping and transactions for you, the startup also created pricing technology to help you get more for your items. Thanks to its algorithms that crawl top e-commerce marketplaces to build more accurate pricing rates and to allow customers to compare “going rates,” Sold said at the time that its prices were (on average) 43 percent higher, on average, than that of Gazelle.

As a result, after just four months, the startup was projecting $1 million in annual revenue and claimed to be growing fast. Nonetheless, the opportunity to join Dropbox ultimately proved to have more appeal for the founders than what they thought could be accomplished as an independent company. The deal, which Sold co-founder Tony DeVincenzi says came together in under four weeks, will see the startup’s nine full-time employees join Dropbox to form a new team within the company that will lead the design and development of “a new Dropbox product.” 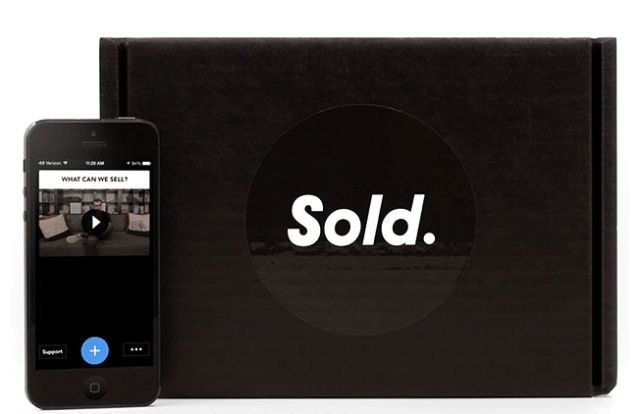 Although the co-founders declined to elaborate on the plans for the new product, they did say via a post on their site that Dropbox’s “roadmap includes exciting new experiences which align perfectly with our ethos of creating products that positively affect people.” While that doesn’t say much, it is clear that the opportunity to reach Dropbox’s user base of 200 million played a hand in determining the outcome. That opportunity, they said, “was too good to pass up.”

Sold will be officially shutting down its product beginning today, and as of now, is no longer accepting new items. DeVincenzi says that the team is putting together a plan to help users finalize transactions and those who currently have items in the system have been contacted and will be dealt with on a case-by-case basis.

Considering that the launch of its Android app in September had allowed Sold to significantly speed up its streamlined e-commerce process — allowing users to move from first post to payment in four days — the abrupt end to its service will no doubt have some of its newest customers up in arms. But, depending on what the Sold team helps Dropbox produce in the coming months, maybe they won’t be without a mobile commerce platform for long.