Remember that night when you and your friends discovered how to “draw” with your camera’s long exposure function?

You started out simple, piercing the dark with a cheap handheld flashlight as you traced a terrible rendition of your name through the air. You were hardly halfway through the last letter of your name before you were running over to the camera to see if it worked. You, like many a bored digital camera owner before you, had discovered light painting.

Pixelstick takes that concept to a pretty ridiculous extreme. 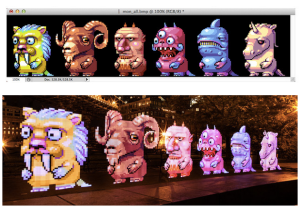 As its name implies, Pixelstick is… a stick of pixels.

More specifically, the Pixelstick is a 6’ bar containing 198 full color LEDs. At the core of Pixelstick is a simple brain: a handheld controller, an SD card reader, and a bit of lightweight circuitry to parse images pulled from the card.

Pixelstick displays those images just one vertical line at a time. To the naked eye, it’s a mess of flashing color. Move it slowly in front of the open aperture of a camera during a long exposure, however, and each pixel becomes a paint stroke. Flash by flash, your ethereal imagery is burned onto your shot.

While that in itself would be quite cool, things start to get really trippy when you bring in animation. You can load up a bunch of sequential images onto the SD card, then use the handbox to switch between them as you shoot a series of photos. If you havent already, check out the video above for some particularly impressive examples. Oh, and the pixelstick can be unlocked and spun around its handle, allowing for all sorts of crazy experiments in spirography.

Pixelstick set out to raise $110,000 on Kickstarter, a goal which they pretty much immediately destroyed. Just 4 days into the campaign, they’ve already more than doubled that (at the time of publishing, they’d raised just over $245,000.) Alas, the cheapest tier to actually come with a Pixelstick — the $250 “Early Bird” package — has long since sold out; at this point, you’ll need to drop at least $300.

(If you pick one of these up, you’ll probably want to drop some more cash for a set of rechargable batteries, while you’re at it. It takes 8 AA batteries at a time, and the team says they can chew through those in a night or two)