Twitter co-founder Evan Williams has a new blogging platform called Medium, which has been a closed-signup affair since its introduction. Today, the platform sent out an email with the news that anyone can now sign in and start writing.

There are a few requirements set out to sign up and use Medium. You must be writing from Chrome, Safari or Firefox browsers, and you must have a Twitter account to post. There’s a verification link sent via email that you click on and then you’re in. Posting is still not available from mobile devices.

Williams founded Odeo — the parent company of Twitter — with Noah Glass after selling his company Pyra Labs to Google. The main product of Pyra was Blogger, which was one of the early products that codified what we now know as ‘blogs’. Now, Williams is in the blogging game again. 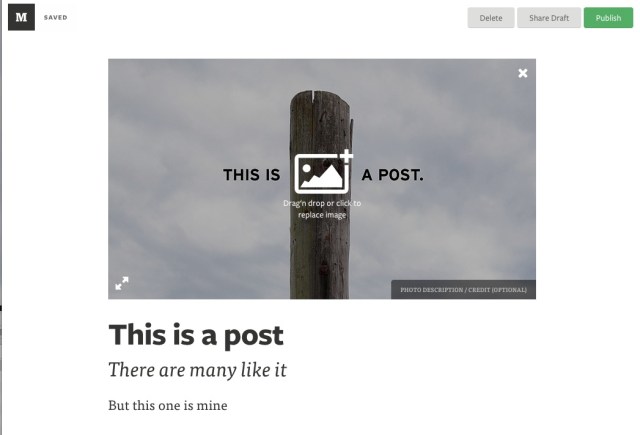 Last month, Williams spoke to TC about his vision for Medium:

“I think more people would be in a better place if more people shared their ideas,” says Williams. Seen this way, Medium is just the next logical step in Williams’ three-product cycle to inject better ideas into the world. Blogger helped open the doors for pajama bloggers to compete with the media moguls. A few years later, Twitter gave the power of broadcast distribution to everyone who had 140 characters to share.

Now, to complete the circuit, Medium wants to make viral information more substantive — the hope in the Pandora’s box of communication. “It’s also an optimistic stance to say that we can build a system where good things can shine and get attention. And there’s an audience for ideas and stories that appeal to more than just the most base desires of human beings.”

I’ve had access to Medium for a while and haven’t used it a whole lot. But I did love the overall writing experience, which is clean and quick. It feels easy to dash off a post based around an image or zip some text in and hit publish. It’s definitely far lighter weight than other options like WordPress, and has a lot in common with the publishing tools offered by Dustin Curtis’ Svbtle network.

Medium has managed to gain some relative popularity among a sea of other blogging alternatives, but not always for the best reasons. While there has been some interesting content, there have also been missteps like a false claim of government email snooping and Peter Shih’s ‘10 things I hate about San Francisco’ post. Topics like these have given Medium a rep for being an incubator for lack of self-awareness and inaccuracy. Still, Williams addressed those issues fairly plainly in his chat with TC.

“Please don’t set this up as Evan thinks tech blogs are crap and therefore is fixing them with Medium,” Williams told us. “People are going to publish crap on Medium.”