Apple has announced the release date and price for the new version of its desktop OS, OS X Mavericks. And the big surprise is it’ll be free. The software is available to download from the Mac App Store, starting from today.

“Over the last few years, we’ve reengineered our development process, and [with the app store], the way we distribute. Today, we’ll revolutionize pricing,” said Craig Federighi, Apple’s SVP of software engineering. “Today, we announce a new era of the Mac.”

Lion, Mountain Lion and Snow Leopard users can upgrade in one step (for free) to OS X Mavericks (the 10th major version release of the OS). It’s available on Macs as old as 2007.

Apple’s prior OS updates had been coming down in price — costing as little as $29 for Snow Leopard and  even less in recent years — but Cupertino making a major OS update free is still a big deal. (Especially if your company name is Microsoft.)

The next-gen OS, which breaks from Apple’s prior convention of using big cat names for OS updates (naming it after a surf break at Half Moon Bay, California,  instead), brings a raft of improvements, including an enhanced Finder, better multimonitor support, a standalone iBooks application, and improved power management to OS X-powered Macs.

Apple spent a while talking up Mavericks’ battery efficiency, memory and graphics improvements at its San Francisco-based event today — as well as diving into apps, maps and notifications.

“We’ve focused on three things with mavericks: technologies to improve the performance of your hardware, new features, and new apps,” said Federighi.

Cupertino had previously said Mavericks would arrive this fall. 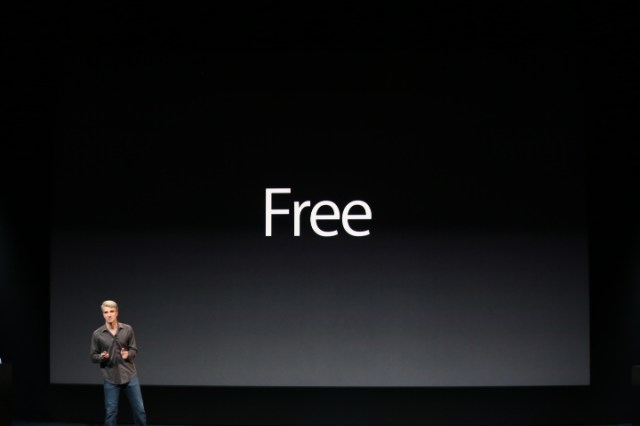