Ping, a mobile messaging app that turns emails into real-time conversations, is relaunching today under the new name of “hop.” (It seems that PING Golf may not have cared for the original name too much). But the name isn’t the only thing getting a makeover since the app’s reveal only a month ago – Ping, now hop, is also now optimized for iOS 7, syncs faster, and includes new and tweaked features that better mimic those found in traditional email, like the cc: and bb: fields, for example, or subject lines that are preserved during group conversations. 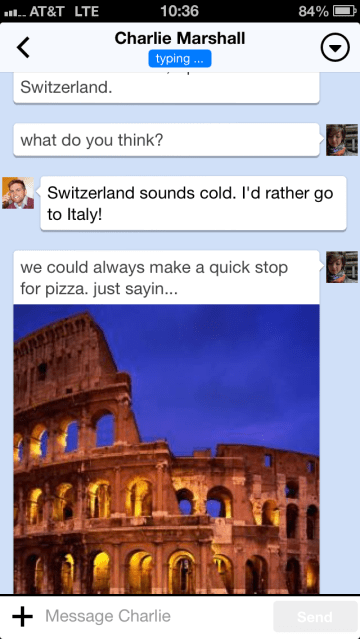 By calling hop a “mobile messaging app,” you may be placing it in the wrong box in your mental model of the messaging landscape. “Messaging apps” bring to mind things like Whatsapp, Snapchat, MessageMe, Path, and others, while hop falls somewhere closer to mobile email clients like Mailbox or Boxer on the messaging app spectrum.

Instead of building yet another SMS replacement utility, the team at hop re-imagined how email would work if it felt more like the real-time conversations that take place elsewhere on our mobile devices today.

Out of the box, hop supports your Gmail, Yahoo, iCloud or AOL mail accounts, and when two users are on hop at the same time, the thread between them becomes a real-time back-and-forth communication, where there are even visual indicators that show when the other person is typing. But like email, hop still allows you to add attachments from mobile that can show up both in the message thread and when browsing the album for the message thread. Currently, you can add photos, video, doodles, voice messages, and office files.

Hop also lets you do other nifty things, too, like create custom alerts for specific contacts while silencing others, for example. Plus, it rearranges your contact lists based on who you chat with the most, and it supports message search, and snoozing messages for later access. 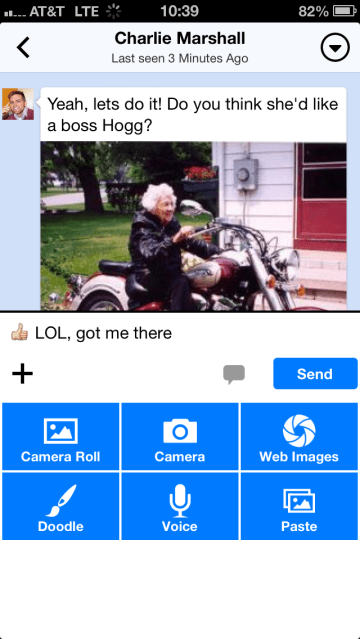 With today’s update, the app offers a compose menu that now lets you control traditional email sending options, including adding and removing people from group threads – similar to the way you can add or remove people on cc: and bcc: on email. The app also syncs messages more quickly, automatically updates the profile photos of those you’re messaging with, and now keeps the “subject line” intact during group conversations.

Hop co-founder Erez Pilosof says these changes were made based on user feedback from around 100 early beta testers.

The Tel Aviv-based startup was founded this April by Pilosof, who serves as lead developer and technical co-founder, along with prominent Israeli angel investor Guy Gamzu, who handles the “business” side of company. Gamzu has also invested an undisclosed amount into the company.

Though the new hop app is live now in iTunes here, it has a reservation system much like Mailbox once did in its early days. There are currently around 40,000 people waiting for their sign-up ahead of you, so get in line.