When it comes to online genealogy, the two major for-profit players are Ancestry.com and MyHeritage. Ancestry.com got a major head start over MyHeritage, but it mostly focused on gathering historical records while MyHeritage put an emphasis on building and matching family trees. But now it’s also starting to amass a wider range of historical records. Today, MyHeritage announced a major multi-year partnership with the largest nonprofit player in the space, the Mormon church-sponsored FamilySearch.

Thanks to this partnership, MyHeritage’s users will now gain access to 2 billion historical records and family tree profiles from FamilySearch. In return, FamilySearch’s users will be able to use MyHeritage’s technology (through that company’s API) for matching family trees with historical records. MyHeritage has committed about 40 of its 150 employees to this project. While the partnership has a time limit, MyHeritage founder and CEO Gilad Japhet didn’t disclose the length of the agreement.

Japhet says the service currently has about 75 million registered users who have added 1.6 billion profiles. It’s available in 40 languages, and while Ancestry.com may be bigger in the U.S., MyHeritage argues that it’s the biggest player in most European and South American countries. 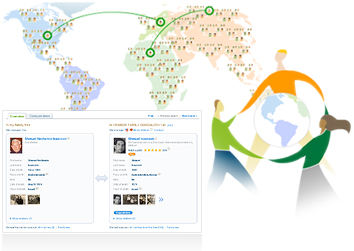 Because it’s hard to migrate family trees between services, it’s seeing very high retention rates, but this also means that it’s hard to gain new users from smaller competing services without outright acquiring those services. About a year ago, for example, MyHeritage bought Geni.com to acquire its engineers, user and data.

One feature that makes MyHeritage unique is its ability to match up its users’ family trees, which helps them discover previously unknown branches of their families. The service’s fuzzy matching algorithm can find these matches even when there are minor errors or alternative spellings.

Today’s partnership with FamilySearch.org brings a wide range of new documents to MyHeritage, which the company is now ingesting and plans to start exposing over the next few months. Given the Mormon church’s focus on genealogy for religious reasons (which at times lands it in hot water), FamilySearch has amassed one of the largest – if not the largest – database of records related to family history. In total, FamilySearch will provide about 1 billion records to MyHeritage.

As Japhet noted, FamilySearch was sitting on a treasure trove of data, but didn’t have the technology to easily analyze it. MyHeritage, on the other hand, has the technology but needed more data. This then is a “win-win-win” in his view because both companies, as well as their users, will benefit from this partnership almost immediately.