When free app Foursquare announced an injection of $41 million from investors earlier this year, CEO and founder Dennis Crowley described how the new funds would help the mobile search and location-sharing platform move away from its perception as a simple “check-in app” and “get closer to being able to prove that there’s a real business here.” A lot of that proof has been coming in the form of advertising on the service, and today the company is unveiling the latest development on that front: Foursquare Ads is now being opened up to advertisers of all sizes, targeting Foursquare’s 40 million users worldwide.

Will it be enough to help Foursquare become the mayor of local mobile ads?

Today’s news is an encouraging sign of progress. It comes after Foursquare first opened the platform to a limited number of large advertisers — some 50 in all — about nine months ago. Then, in July 2013, it opened a self-serve version of that platform to selected small businesses. Noah Weiss, the ex-Googler product manager overseeing ads, tells me that some 800 small businesses in 36 countries have taken ads in the limited beta.

Foursquare is hoping to tap into the 1.5 million small businesses that have already registered their businesses for free on the service (that’s up from 1.3 million in April this year). While registering will already make those businesses discoverable through Foursquare’s apps and website when people search for restaurants or other services in their vicinity, the idea here is that buying ads will give these businesses an extra exposure lift.

As of today, small businesses (not just in the U.S. but worldwide) will be able to go to Foursquare’s ads dashboard and create their own promotions. Foursquare is banking on its location-based check-in services to set it apart from others like Google and Facebook: engagement will be measured by how many people actually visit the place in question, and advertisers will be charged based on that.

“We’re moving past the days when business owners have to figure out if a “like” or a “click” has any meaning in the real world,” Foursquare writes in its blog post on the news. Other metrics, of course, will also include how many people viewed an ad and how many taps the ads have received, but again the primary emphasis will be on the physical delivery of people into their premises. “This easily measures effectiveness,” Weiss told me. “How many saw the ad and how many become customers?” 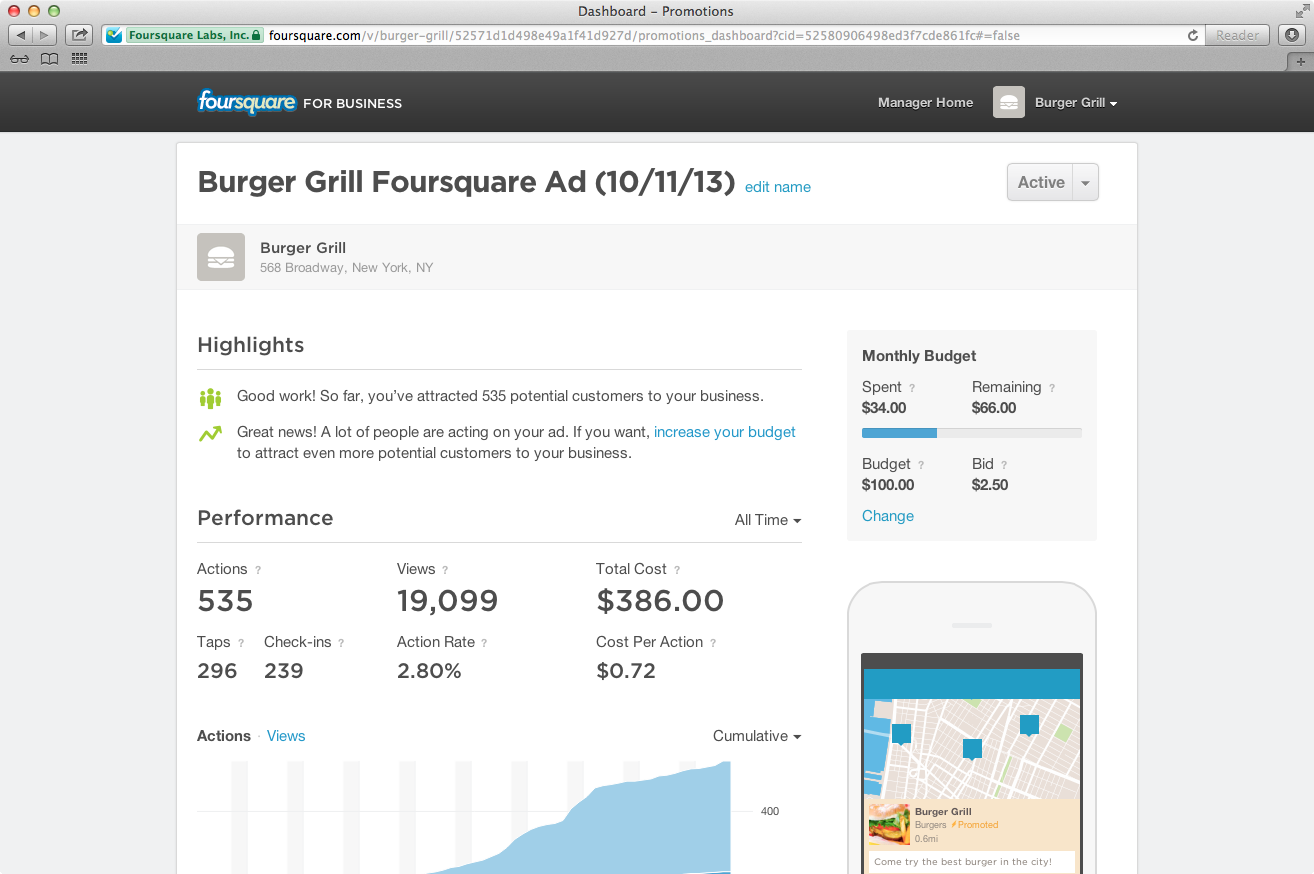 Because there are already a number of other location-based mobile platforms out there targeting small businesses — aside from Google and Facebook, there are also Groupon and Yelp, for starters — Foursquare is positioning this as something that is distinctly different from the rest. 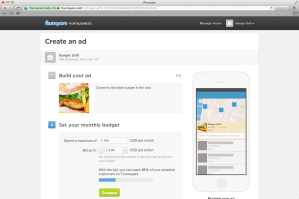 For starters, Weiss points out that by basing payment on how many people respond to the ad, they are promising advertisers no minimum upfront commitment. “You say what’s your bid and what’s your budget,” he says. “It’s like AdWords,” he adds — no small coincidence, considering that Foursquare has over the years hired several people who have worked on search and ads (many from Google). Weiss tells me that the ads platform has been built entirely in-house.

Another is in how Foursquare is pitching flexibility in terms of what advertisers show in their ads. “One of the things we’ve seen with the tools already out there is that they have been very one direction — for example, too much of a focus on daily deals and margin discounts,” he told me. “Others like Yelp can see people needing to make upfront commitments for six months and paying 100 bucks per month. What we’re releasing is aiming to get at all those weaknesses.” Foursquare points out that ads can feature discounted deals, but they can also focus on user reviews or user-generated photos of the place.

For now, ads on Foursquare are appearing in two places: the first is in targeted search results pages, organized by keyword and distance from your specified location. Weiss notes that when the listing is an ad, it’s on a “very clear bright background color” with an additional little lightning badge (they’ve always had nifty little badges).

The second place where ads are appearing is on the home screen of the app, in the form of “recommendation cards that show up” when you log on to the app. If the first place is Foursquare’s version of Google’s search ads, this is the company’s display effort, “a little fuller up the intent funnel” as Weiss describes it. Like the search ads, these are also based on your current location when you fire up the app. There are some nice touches to it as well — if you are in a city, like London, you are more likely to get recommendations (and ads) within very close proximity to you. If you are in a more remote place, the assumption is that you will be willing to get in a car and travel a bit further (and it may also be the case that Foursquare simply has less density with advertisers in those locations).

This also seems to join up closely in how Foursquare is evolving its recommendations, which recently have had an extra boost with notifications to tell you when you are serendipitously close to something cool. (Radar redux, in a sense.) Whether ads make their way to these serendipitous notifications seems to be an obvious step — hopefully not a spammy one.

For now, the ads will be running just on Foursquare’s own mobile and web platforms (on the web, via explore, which Weiss says is currently getting “tons of SEO traffic.”), and he declined to comment on when and if Foursquare had plans to extend that to other platforms. What might those be? For starters, you might see some promotional opportunities on other social networks like Twitter, where many share their Foursquare locations.

The other biggie rests with one of the most popular uses of Foursquare today: as the location layer over 50,000 third-party apps. Again, right now there are no plans to piggy back advertising badges or other information on that data. But today that data remains free to use and you can imagine, for example, how Foursquare may potentially, one day, create two tiers to it, with one being ad-free (at a price) and the other being actually free for developers to use (and free of ads). “For now, the monetization effort is focused on our own apps,” Weiss emphasized.

“Growing at a clip”

I also asked Weiss about how ads have been performing up now for existing advertisers. He says that with large businesses, “we have exceeded all our targets so far and we are growing at a clip. What we like to see is how much renewals we get and I think one of the really great things is that for the first time they are able to measure foot traffic in stores. So the renewal rate has been good. The reason we are rolling out to small business is because the reporting has been so attractive to the bigger businesses.”

Among the 800 existing small business advertisers, he says that the cost per action right now is averaging in the $1-2 range, and therefore “very affordable.”

“In terms of ROI, a customer is worth $5 or $10 for them, so this is an amazing multiple based on what they’re paying for ads,” he says. But with budgets in the range of $100 per business in the U.S. and in the “couple of hundreds” for those outside the U.S. you can see how it was imperative that Foursquare roll this out to its wider base as soon as possible to scale it up. Conversion rates are around the 1-4% range, he adds.

Right now Foursquare is selling everything direct, a result of the company beefing up its ad team earlier this year. But it is also weighing up how it will work with third-party marketers in the future. “It’s something we are actively thinking about,” Weiss says, “the different ways we can partner with different social media ad buying platforms. We want to make sure we have our product firmed up and solid before we start exposing our API to others. It’s certainly something we will do in the next year but not until we feel it’s right.” He says it’s Foursquare may also work with resellers in markets where Foursquare may not have as strong a sales presence. “We are actively in discussions,” he says.