PayPal has today scored another deal to bring its technology to more point-of-sale platforms via an integration with iPad POS solution provider, Revel Systems, a company whose business has grown by 400% year-over year and now includes big-name clients like Dairy Queen, Goodwill, Popeye’s, and others. While PayPal is currently focused on building up its point-of-sale presence involving its own proprietary hardware and software with its newly launched Beacon device, the company is not attempting to take on quickly growing Square and other competitors with in-house technology alone.

In recent months, PayPal has made deals with a number of point-of-sale hardware makers to bring its payments technology into the “real world” via deals with the makers of existing systems. One of the larger partnerships was with NCR, announced at the beginning of the year, which allowed PayPal to begin integrations with several products in the longtime hardware maker, as well as expand PayPal from online and mobile into new places, like restaurants, gas stations and convenience stores.

It has also teamed up with others like Gilbarco (gas stations POS tech), as well as a number of other POS system providers both large and small, including Booker, Leaf, Erply, Leapset, ShopKeep POS, and Vend, for example.

With Revel Systems, however, the company has found its way onto another growing startup’s POS platform. For background, Revel raised $10.1 million in Series B funding earlier this summer, with new investments from Tim Tighe, former CEO of Hungry Jack’s and SVP of McDonald’s Southeast Asia, and Sean Tomlinson. The round was focused specifically on increasing the pace of Revel’s expansion, the company explained.

Revel has been profitable as of Q3 2012, the team told TechCrunch at the time of the announcement, but says this will allow them to grow even more quickly – as well as internationally – than had they just continued to reinvest revenues. 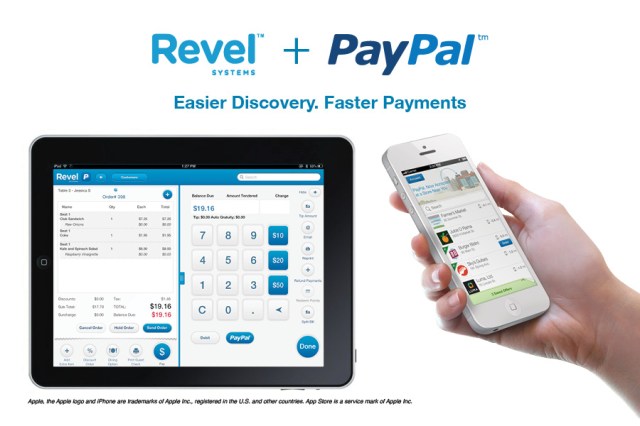 Founded in 2010, the San Francisco-based startup currently has traction with a number of businesses, primarily in restaurants, retail and grocery, with its iPad-based platform. In addition to support for transactions, it also offers tools for managing other aspects to the business, such as payroll, inventory tracking, CRM, and more. Just last month, it also scored a deal with Alabama State University allowing it to outfit the entire football stadium with Revel-powered iPads found at some 30 concession stands throughout the facility.

The new PayPal integration is good for Revel as it offers another way for its customers to pay; they will be able to use the PayPal app on iOS and Android at any Revel Systems’ POS shop. But it also means that restaurants can offer an “order ahead” option where payment takes place via mobile, instead of at checkout upon pickup. And Revel’s customer base will gain added exposure through inclusion in the PayPal app’s discovery feature, which highlights nearby retailers accepting PayPal.

But more importantly, perhaps, it gives PayPal another foothold at POS in the real world, which is key to its ongoing growth strategy. The company already has established relationships with a number of large brand-name chains, giving itself an in at thousands of well-known locations across the U.S., and it recently launched Payment Code to allow for better integrations with merchants’ existing systems. Through Revel, PayPal gains access to those merchants who are already ditching dated POS systems for more modern technology – a good base to kickstart PayPal’s mobile payments adoption, too.

Revel today has , [update: Revel says these figures are no longer accurate. It has deployed over 5,000 POS terminals], and is now hiring over 100 people in San Jose, San Francisco and elsewhere. Around half its clients have already upgraded their systems to include the PayPal support, while the remaining customers will need to run a 2 minute update procedure. Revel also offers other third-party integrations via its Marketplace, including LevelUp, First Data, Heartland and more.

Correction: Revel is profitable as of Q3 2012, not Dec. 2012. The article has been updated to reflect this change.