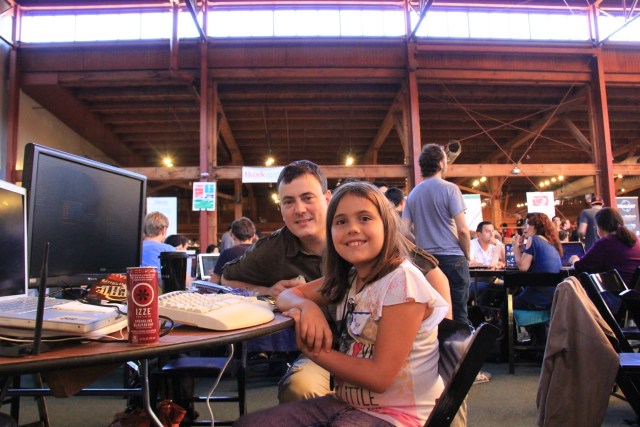 When Alexandra Jordan presented at this year’s TechCrunch Disrupt Hackathon, the fourth grader from Sunnyvale, CA proved to be something of an audience favorite.

Jordan conceived of and coded her own hack, a playdate app called Super Fun Kid Time, which she is planning to launch in November.  In honor of the International Day of the Girl — formally recognized by the United Nations on October 11th, 2012 — we asked Jordan to write a guest post on her experiences as a young coder.

A few weeks ago my dad and I went to the TechCrunch Disrupt Hackathon in San Francisco. I really enjoyed it and here are some of the reasons:

There were several booths and stalls and every so often I got to explore. It was a gigantic space and it didn’t feel cramped. There were so many different computers. The hackathon also had a great atmosphere for programming. The thing is when you program you HAVE TO be in a good environment so you can concentrate. Finally I think it’s awesome to be around so many professional programmers.

Presenting on stage to so many people gave me lots of confidence. So many people were excited about my project Super Fun Kid Time. It is a play date finder for kids. I built it because parents always forget to exchange details before summer vacation. Since I presented at TechCrunch Disrupt, 5,000 people have signed up for Super Fun Kid Time and we haven’t even launched yet!

Now other people want to launch it in countries like Brazil and Australia.

So many people wanted to talk to me after the event. Everyone was very supportive. It was wondrous. The National Center for Women in Information Technology at the University of Colorado sent me a gift package including a tee-shirt even though they were dealing with a bad flood. Doug from Microsoft even gave me a new computer for programming. I was interviewed by lots of people including Good Morning America.

About a week ago my dad and I did another hackathon in New York. After seeing me and my dad on TechCrunch a company called ooVoo invited us. They helped us add video chat to Super Fun Kid Time for up to 12 people. It was a daytime only hackathon, which meant I didn’t miss a thing. There were four floors to explore and they were all different. I was interviewed by the BBC, which will make my grandpa happy. (He loves the BBC) 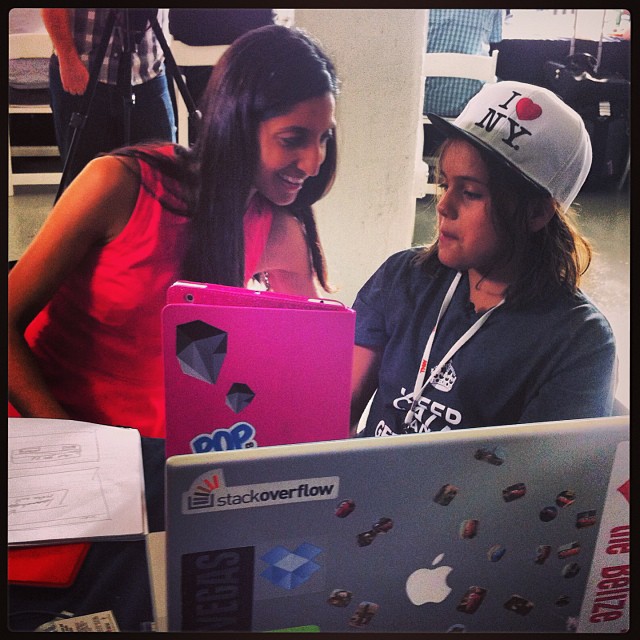 I like programming because I like being able to sit down and just do it, I like how it makes you think and I like working on projects with my dad. I also like reading, writing, drawing, math, TV and word games.

My motivation is to be a great person, to help the world, to make discoveries and to prove that girls and women can do anything. My inspiration is my dad and my family and friends, but also women programmers. I have been inspired by the women in tech that I met at TechCrunch Disrupt and at ooVoo and others.

We have several other future project ideas but one of my ideas is Safe Tube, a social filter for YouTube. My brother is autistic and sometimes when searching YouTube he finds videos that are inappropriate.

SafeTube would solve that problem. That was actually my first hackathon idea. I also want to learn to program my Raspberry Pi. In the future I would like to make technology for veterinarians because I like animals. But first we have to focus on launching Super Fun Kid Time because so many people are waiting to use it.

After launch, I am planning on starting a tech club for girls after school. This will be for one hour a week. It will teach other girls to code, because if girls learn to program when they are young they won’t be discouraged later.

It is important to have more women in tech because women in the past have been held back. It is important to find their way back despite this. Also women like things made by women. If your company has no women programmers then your product will not contain the ideas of women, and you might not be successful.