“With @Jack, @Ev & @biz at @Twitter today, together, guessing the IPO/S-1 filing will probably happen tomorrow,” Om Malik tweeted last Thursday, presciently predicting the arrival of the company’s S-1 a couple of hours — not 24 hours — later.

So clearly this was planned, the world is thinking. Twitter, champion of the news cycle, doing some more skillful cycling. Well, not exactly.

From what we’re hearing, the Very Special Tea Time was not a pre-IPO production. The three founders were at the company’s 1355 Market headquarters coincidentally after Twitter CEO Dick Costolo had promised to bring the band back together in front of all employees. Jack Dorsey and Ev Williams had jointly appeared at a recent sales conference in San Francisco this past summer to great success, and someone had asked for a rematch. The last time all three core founders had spoken together was when Twitter had first opened the new office over a year ago.

Apparently Costolo thinks it’s culturally beneficial for new Twitter employees to be connected to their roots and inspired by their past. It’s like the techie version of Magic Johnson visiting Michigan State. As to why the fourth Beatle Noah Glass wasn’t there? Well, history is written by the victors.

So Biz Stone, Jack and Ev took the stage at the company’s Tea Time last Thursday, more out of obligation than anything else, we’re hearing. Promises made, promises kept. At least two of them, the two on the board, must have known that the company’s financial documents would later set the world on fire. Twitter functions as its own amplifier/replicator/self-fulfilling prophecy.

But what would the three co-founders speak about? The company mission perhaps, carrying the Twitter spirit forward — anything but the IPO, which isn’t legal. Because it was Tea Time, the founders were introduced and preceded by CEO Costolo. Employees had submitted questions in advance, which were asked by Twitter Head of Communications Gabriel Stricker. The questions were voted on electronically by employees using a Digg-style platform.

The first question was “How does it feel to be here?” and it was answered almost unanimously by all three (all quotes paraphrased): “It used to feel big and now it feels small.” Which is what going from 6 to 2,000 employees would feel like for anyone. Said Biz: “I remember when we first came into the space, and it felt so big, and now when you see all the employees here it seems kind of small.”

The second employee-vetted question was “How do you envision Twitter many years from now?” which led to all the founders doing a variation on the theme of the product being timeless: Though it will evolve, it will serve the same purpose, which is the basic human need to connect with one another. Biz and Ev have often talked about how the best technology becomes invisible: More and more and more unobtrusive. That is the plan for Twitter.

The third question was, “If you could have done anything differently would you have?” To which Biz replied, “I wouldn’t have done anything differently. In our early days we were talking with these other startup guys in Palo Alto, and they said, ‘We have this platform and want hundreds of millions of users. You have hundreds of users but an imperfect platform.'”The grass is always greener, according to Biz, who admitted there was a point when he considered the trade of platform stability for user traffic, and didn’t.

The fourth question was, “Is there anything that you thought of shipping that you never shipped?”  Yes, said Biz. Some sort of word-game app. Which he did not name. 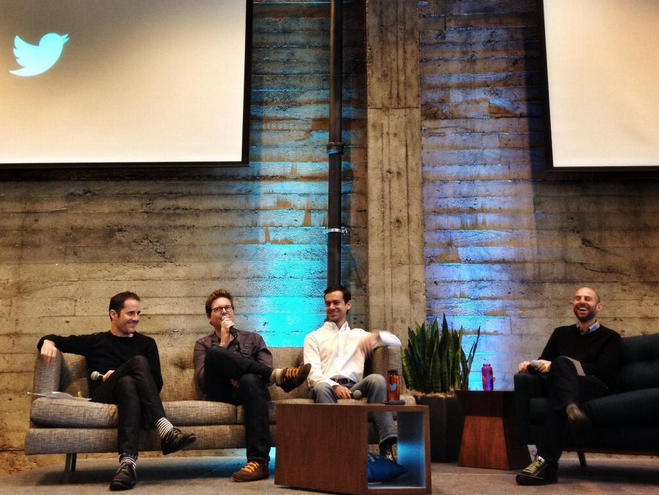 The fifth and last question was on the subject of Nick Bilton’s upcoming Twitter book, which, from what we’ve heard, employees are itching to read.

Basically, they were asked how much of the book is real and whether they care about it or are  genuinely indifferent. Biz said (again paraphrased), “Actually I think it’s kind of cool that we’re significant enough to warrant a whole book being written about us.” Whereas Ev said that if the true vision of Twitter is actualized, what’s written in the book will eventually seem irrelevant. Jack said that it would be interesting to take a look at one moment in time with regards to Twitter, but looking forward 10, 20, 50 years from now, he didn’t think this will be a large part of Twitter’s story.

The entire interview, which started at 10:30 a.m. last Thursday, lasted for about 20 minutes. From what we’ve heard, the packed house of close to a thousand employees and more tuning in remotely enjoyed hearing the founders talk about the early days in 2008, and what it was like to build the company to 215 million users in six years.

When Stricker said that they were going to have to wrap, Biz asked, “Is this an expensive meeting?” Well, yes, just the four of them and the entire company. From what we know, very few people in the room knew that this was the day that the private IPO document would become public. That first tweet was a bigger moment than the public  S-1 in many people’s eyes.

Since Tea Time happens every other Thursday or Friday, next week’s will likely raise questions inspired by last week’s S-1, and about revenue and the ever-elusive female board member. This week’s did not, and it’s timing with the IPO was a coincidence, according to people familiar with the matter.

As to when the company will eventually IPO, who knows? With the shutdown and the debt cliff, everyone is rechecking their math. The plan is still before Thanksgiving as far as we’ve heard. As previously reported, the company would like to be as undramatic as possible, so the sooner the better.

The temperature of the room was sweet. And there was affection there, we heard. But the event, though top-secret and cool for people who cared about the company’s history, was unremarkable. Which is unusual for Twitter.